Navigating Through a Field Of Lies 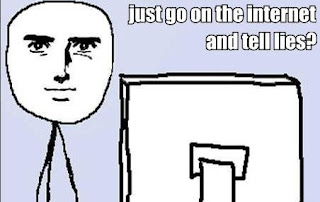 There's too many clouds of smoke and rooms lined with mirrors for the public to get a true picture of anyone nowadays.

Inflexible Ideologies and hate-filled rhetoric masks common sense and the public is forced to wander though a field of lies in search of truth.

These are but a fraction of the lying memes and articles circulating in social media recently. The people who post these lies know they're lies, but they hope if their repeated (shared) enough they will become truth for some haters.

The sad thing is it works. Facts become sand shifting in the desert of falsehoods. Ignored. Even reviled by some who promote hate-filled ideology.

All just a slice of America's story in the 21st century.

Time for me to walk on down the road...
Posted by ImBlogCrazy at 6:35 AM