Just Another Moment of Silence With No Solutions 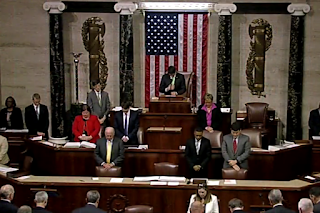 Another moment of silence. This time for 49 people massacred in Orlando, Florida.

Sadly, that's all there will be thanks to the ammo and weapon industries, and their lapdog the National Rifle Association (NRA).

With the help of Republicans who toady up to those industries and their lobbyists, no federal gun control laws have been passed in over a decade.

Instead, we get moments of silence.

Fight In House of Representatives After Moment of Silence

A moment of silence was held on June 13th outside the Dr. Phillips Center for the Performing Arts in Orlando. Moments of silence were held worldwide for the 49 victims.

Moments of silence were held in churches, sporting events, and community organizations nationwide.

Lady Gaga speaks at vigil for victims in Los Angeles. They hold a moment of silence.

Stock prices go up after massacre.

These gun sales illustrate the great divide in America today. On one hand, people want more control over the sales of weapons; and on the other hand, people don't want any controls on the sale of weapons.

For example, the Orlando shooter (I won't say his name) could have been stopped if we had a law about people on watch lists not being able to purchase weapons. He was on a watch list.

We are no longer the United States of America. This country is so polarized over issues like gun control that any hopes of compromise are dead upon arrival.

Like the victims of these mass shootings that we can't do anything about. The only national response has been prayers and moments of silence...with no hope for a solution.