'How Low Can We Go?' Competition Is Open To Suggestions 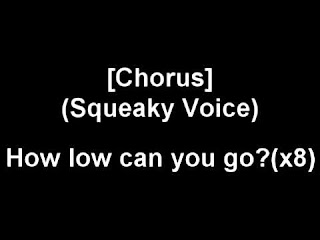 Thanks for stopping by today.

It's my pleasure to introduce the 1st Annual "How Low Can You Go" competition.

For obvious reasons, Donald Trump, who already has a lock on being a low-down clown, can't be entered into this contest because he's too easy of a target.

Everyone else is fair game however. We're not talking about going under a limbo bar either.

One of the early front-runners in the competition is New Jersey Gov. Chris Christie, who went from attacking Trump to kissing his ass in one blinding moment after withdrawing his bid for the presidency.

Christie was last seen defending the Donald and claiming "...he's not a racist."

TWO FOR THE PRICE OF ONE

Breanna Koski and Joanna Duka, owners of the Phoenix-based stationary and calligraphy studio, Brush & Nib, filed a so-called “pre-enforcement challenge” arguing they could face months of jail time for violating a Phoenix ordinance that prohibits businesses from discriminating on the basis of “race, color, religion, sex, national origin, marital status, sexual orientation, gender identity or expression, or disability.”
The ordinance, they argue, forces them to violate their duty as artists who serve God.
Wow! How low can they go?
Jail time for Phoenix artists who disagree with government? I don't think so.
So, you might wonder, did the women refuse to serve a gay couple? Were they found to have violated the ordinance? Have they been locked up? No, no, and, no.
Koski and Duka were scared they "might" be asked to design cards for a same-sex wedding. Oh, the horror! Saints protect them!
What came next is a great example of how low someone can go (beside these two women); The Christian Broadcasting Network headlined its story of the duo: “Artists Fighting Back to Avoid Jail Time For Refusing Gay Wedding.”
Plainly put, there wasn't even a smidgeon of a chance those women would have been jailed for their actions.
That's enough for now. There's lots of competition out there on a daily basis.

Feel free to enter your favorite examples (under comments) to this blog. I'll be glad to share them!
Time for me to walk on down the road...
at June 20, 2016