A Shameful Case of Greed: Children's Health at Risk For Convenience 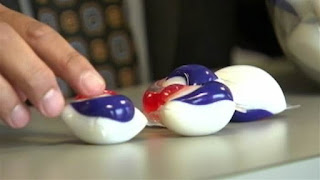 Now imagine putting that detergent into brightly colored laundry pod. (photo - TODAY)
That's just what the industry decided to do in the name of convenience.

Young children eat them because they think the brightly colored little pod is a goodie. The result:

Despite repeated warnings about the dangers to young children from laundry detergent pods, calls to poison control centers continue to rise, according to a new study.
Researchers found an increase of nearly 20 percent in reports of children putting the brightly colored packets into their mouths, with serious and sometimes even fatal consequences, according to the study published in Pediatrics on April 25th.

What baffles me is that the manufacturers are still making these pods! They've made a couple of changes to them, but nothing that has slowed the increase of poisoned children down.

Instead lawmakers defend the industry's use of them, while making weak attempts to mitigate the pod problem.

It should be a no-brainer. Stop making the damn things! When warnings have to go out to households with children not to use them that should be enough to pull the plug on the pods.

What's more important here? Convenience, or children? It appears to me that the industry has made that choice.