What do you see in the photo below?

Someone blocking a baseball bat with their arm and saving a kid from harm. Right? 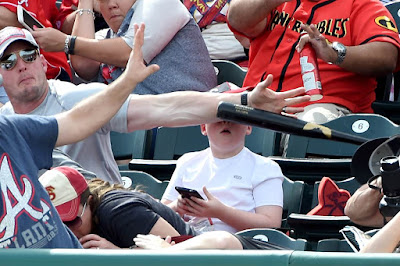 Take a look at what the kid is holding.

If the man next to him hadn't been watching the game closely, that little boy would have been picking splinters out of his teeth!

Here we have a young fan who gets to see major leaguers play live baseball, and he's checking out his cell phone! What's wrong with that picture?

I was watching a pro basketball game the other night and saw an errant ball slam into a young fan who had his nose in his cell phone. Talking front row seat.

That kid had the best seat in the house and he couldn't put his cell phone down long enough to observe real live action unfolding in front of him.

What is going on with young fans today?

Is it, like I suspect, a case of technology addiction? It appears todays' youngsters are operating on two levels - the social media mode, and the real world.

There's a right time for each. Combining the two can pose problems, as demonstrated in the examples above.

It's sad to see. I can't imagine how thrilled I would have been, as a kid, to sit in the front row of a basketball game, or the best seat in a baseball stadium.