A Peek At The Power of Bird Poop 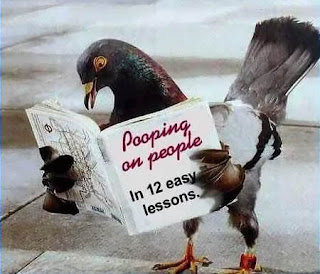 Last December, bird droppings were the cause of a shutdown at a nuclear power plant outside New York.

Experts say the automatic reactor shutdown was apparently from bird feces that caused an electric arc between wires on a feeder line at a transmission tower.

Bird poop shows up everywhere in our society including baseball. Like this bird bomb on Mike Matheny:

Bird poop has become a concern for some lawmakers due to an influx of crows on the Iowa State Capitol grounds.

According to Padula, those chemicals ultimately get into the birds' reproductive tissue and perhaps even into their eggs, which could affect egg-eaters like eagles and foxes.

I could continue to provide more examples, but I think you have the idea - bird poop is NO JOKE!