Why Is Donald Trump Really Running For President? 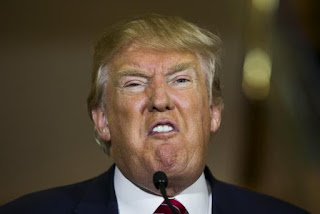 There's absolutely nothing in Donald Trump's backround that shows he's interested in serving the American people.

You can't tell me he relates to the average American. He's the son of a millionaire. His father, Fred Trump, had a well-earned reputation as a New York slumlord.

Music legend Woody Guthrie moved into an apartment complex owned by Fred Trump called Beach Haven in 1950. In a letter found in Guthrie's archives he wrote this about Fred Trump:

I suppose
Old Man Trump knows
Just how much
Racial hate
he stirred up
In the bloodpot of human hearts.
When he drawed
That color line
here at his
Eighteen hundred family project...

Donald Trump is just a chip off the old blockhead. He was sued by the Feds for not renting to African-Americans in 1970.

His insideous plans for different segments of our society run counter to everything America stands for.

If you say he hires minorities, that's hardly a recommendation for equality when he wouldn't even rent apartments to them until forced to.

Donald Trump sued for fraud in California and New York

The biggest thing to consider about Donald Trump is he'll say anything (just like the politicians he supposedly reviles) to get a vote. His life is about flip-flopping (making deals) on issues for expediencies sake.

With no track record of serving anyone (let alone a majority of Americans) he wants to be president.

The real question is why does Donald Trump really want to be the President of the United States?

Anyone who knows him is aware of his out-sized ego and temper. He's like a petulant child when things go wrong.

Above all, Donald Trump, the reality show host, has transcended into a dangerous demagogue. He has learned how to exploit fear and runs his campaign on it.

Ask yourself if he really cares about you, and making America Great Again, or if he sees an opportunity to get richer by lowering taxes on corporations like his own?

For starters. We're talking a field day for the 1%ers.

Remember that he always describes himself as a "businessman first." That should be your first clue.