The New Normal: Why I feel like a dinosaur 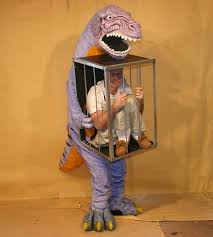 Try to imagine the following scene:

Your standing on the steps of the New York Public Library watching three fat nude women getting their bodies painted by an artist.

Nearby, little children, and their parents, check out this blatant act of public nudity with curiosity…and not much more.

The event was organized by Kimberly Massengill — who goes by the name of Substantia Jones — to mark the eighth anniversary of the Adipositivity Project, which celebrates fat bodies and works to combat sexism.

Okay. So this is supposed to be a good thing.

When I was growing up this same scenario would have been viewed quite differently. All three women, and the artist, would have been arrested for public indecency. Parents would have covered their children eyes up and hoped they weren’t scarred for the rest of their lives.

As my fellow baby boomers and I fade away into history, it’s not without a sense of wonderment, and disgust, at how some things have changed. The new normal has no limits.

I don’t know if that’s good or bad. I just know that once you cross some boundaries there’s no turning back. Like the dinosaurs.