A Veteran’s Picks for Music About the Vietnam War 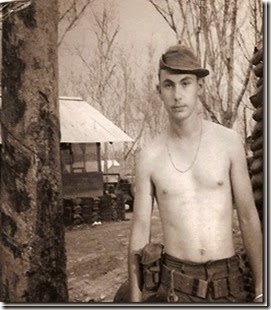 As my regular readers know, I’m a Vietnam/Cambodian veteran (1970). Lately, I’ve been looking to music to portray parts of my life experiences.

I’ve selected the following 15 Vietnam-related songs to share my story as a Vietnam veteran. It wasn’t easy keeping the list to just 15.

I could have done more, but the ones I selected should do the job. I hope you enjoy them.

Here’s my story put to words,music, and videos.

Country Joe & the Fish – Vietnam Song asks the question, “what are we fighting for?”

Canned Heat – Going Up the Country live Woodstock 1969 “I’m going to leave the city… and get far away!” This song was tied into the hippie movement, but was also an anthem for Vietnam veterans. Don’t watch/listen to this video if you’re offended by nudity. This video has uncensored pics from Woodstock.

The Rolling Stones - Paint it Black this video/song has special meaning to me.

This song was blaring on a boom box as I rode in a Huey on my way to Cambodia.

I was part of an operation that resulted in angering many Americans who thought the war was being extended into Cambodia. It wasn’t a declaration of war on Cambodia – we were just chasing the NVA across the border where they had set up headquarters.

The Doors - Unknown Soldier video shows Vietnam clips from 1968. The Doors are one of my favorite groups. “Make a grave for the unknown soldier…”

Creedance Clearwater Revival - Run Through The Jungle – video shows clips from Casper Aviation Platoon that served in the 173d Airborne Brigade during the Vietnam War from 1965 –1971.

Buffalo Springfield - For What It's Worth - video shows the band (circa 1967), and clips from the Sunset Strip Teen Riots in November of 1966.

Barry McGuire - Eve of Destruction – “Your old enough to kill, but not voting…” This video has some great photos representing the times.

Kingston Trio - Where Have All the Flowers Gone? “When will they ever learn? Where have all the young men gone? They’re gone as soldiers…” Another really strong anti-war song that makes me nostalgic.

Black Sabbath – War Pigs – I was lucky and got to see Black Sabbath in concert at the Great Western forum in 1971 – shortly after getting out of the Army. They played this tune then. Also, Grand Funk Railroad rocked my night! What memories!

Mark Maysey - This is My Rifle – I love this one. Sure reminds me of boot camp at Ft. Ord, California where I repeated that chant in as loud a voice as I could muster: “This is my rifle – this one is my gun – one is for killing –the other for fun.”

Edwin Starr – WAR – this 1970 Motown Time Capsule video shows clips from the times. “Soul Brothers” constituted more than half of the fighting forces in Vietnam.

John Schumann, Redgum - I WAS ONLY 19 - This song really spoke to me, I was 19 when I fought in Vietnam and Cambodia. The video portrays the Australian young men who fought in Vietnam along side of us. It also mentions Agent Orange, and talks about PTSD.

Mitch Townly – The Wall – this video tribute is for all my brothers who died in that nasty Vietnam War. Sometimes I remember my squad like yesterday…

Jason Billington – The Eagle Cried - Written and recorded by US Army Major J Billington. This song was written in honor of the sacrifices of Vietnam veterans, who did not receive the hero's welcome that they deserved when they came home from the fight. It was performed at the 13th Combat Aviation Battalion Reunion at Fort Rucker, Alabama, held on May 15, 2010.

Thanks for your service. You sure were young! Cross-selection of songs carry great meaning and portray both sides of the war.....those protesting against it and those who found themselves servicing in a land far away from home. As it was in your day and has always been, and continues to be now, the media portray a picture from the truth.

Unfortunately, the public continues to buy into their narrative and "boys" no young men are vilified for doing what they are called to do by their country.

I enjoy your selections of songs as they also have meaning for one who grew up in that era and witnessed homeland events from the eyes of a youth trying to understand what it meant to be a patriot and a responsible citizen.

Other music selections you have shared on other posts equally bring back nostalgia for anyone of any age during the 60s.

Thanks for your service then AND now!