The Man Behind the Mask Used in Modern Day Protests

Have you ever wondered why so many protestors worldwide are all wearing the same mask?

You know the one I mean.

A stylized portrayal of a face with an over-sized smile and red cheeks, a wide moustache upturned at both ends, and a thin vertical pointed beard.

The man behind the mask is a terrorist named Guy Fawkes.

The Guy Fawkes mask is a modern depiction of Guy Fawkes, the best-known member of the Gunpowder Plot, an attempt to blow up the House of L 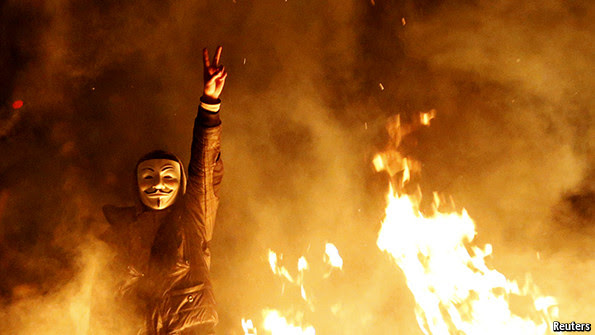 The use of a mask on an effigy has long roots as part of Guy Fawkes Night celebrations.

The modern mask was designed by illustrator David Lloyd, and it came to represent broader protests after it was used as a major plot element in V for Vendetta, published in 1982, and its 2006 film adaptation.

After appearing in Internet forums, the mask became a well-known symbol for the online hacktivist

group Anonymous, used in Project Chanology, the Occupy movement, and other anti-government and anti-establishment protests around the world.

The mask has turned up in new venues, like Ferguson, Mo., and New York City – both locations where black men were killed by police officers in the line of duty, sparking protests.

The Guy Fawkes mask has become a worldwide symbol of grass roots protests against government actions.

But, it also doubles as a symbol for cyber terrorism - via Anonymous - and other secret groups with their own agendas.

Check out all the mask photos in this article/photo essay:

The mask popping up in protests around the world