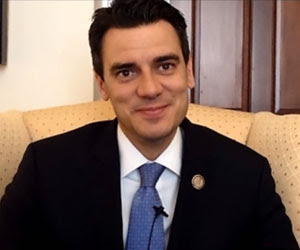 I thought I’d give a shout-out to second-term Congressman Kevin Yoder (R-Kansas) today. That’s his smiling face in the photo.

How come your constituents are having a hard time reaching you lately? Could it be that sneaky little bill you introduced?

You know the one I mean. The one you introduced last summer. Don’t be shy now, everyone knows your largest contributors are in the finance industry. Are you going to make me spell this out?

Okay then. That piece of crap you introduced was literally written by Citigroup executives. Your thinly-veiled attempt to pretend it was your wording was laughable, but good enough to get it rolled into an amendment to a spending bill in a House subcommittee meeting.

The rest, as they say, is history.

“The provision, which prompted a fiery speech by Sen. Elizabeth Warren (D-Mass.), undoes a rule that prevents big banks from relying on the Federal Deposit Insurance Corp. to bail them out if things go sour when they trade risky assets.

The rule was put into place as part of the 2010 Dodd-Frank law, which overhauled the financial regulatory system after the 2007-2008 financial crisis stemming from banks making extremely risky bets and losing. The government had to bail them out with taxpayer money, and Yoder's provision paves the way for another possible bailout.” (source)

So, my question now, Kevie boy, is why have you’ve been so quiet about about your deed? I haven’t heard a peep out of you about the spending package since it passed the House.

Like the media, and your constituents, I haven’t been able to reach you.

Your office hasn't responded to multiple requests for comment on why you slipped the Citigroup language into it. That’s odd, don’t you think? Those press statements on your website say nothing about the provision or the spending bill.

There are no posts about it on your Facebook page.

Nor was there anything on your Twitter feed. But, I did notice some of the comments on your Facebook page. You’ve got some explaining to do boyo! It seems Kansas voters have been getting wind of your sneaky little maneuver and they’re not happy campers!

They’re joining the rest of the nation’s voters in universal condemnation of your underhanded action. Got a hunch your not going to have a long career wise guy!

Meanwhile, those good old boys at Citibank maintain the rule change is good for everyone. Everyone on Wall Street that is.