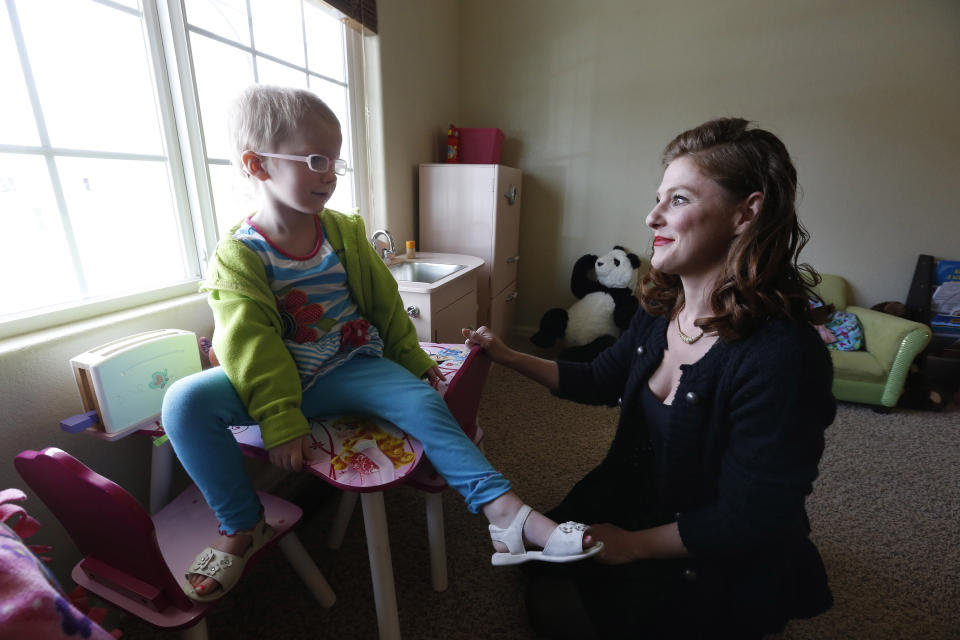 In this April 29, 2014 file photo, Moriah Barnhart, a mother of a child with severe cancer, sits with her three year old daughter Dahlia, who receives legal medical marijuana extracts for treatment, at their home in Colorado Springs, Colo. Colorado is poised to award more than $8 million for medical marijuana research, a step toward addressing complaints that little is known about pot's medical potential. Photo by Brennan Linsley.

The grants awarded by the Colorado Board of Health will go to studies on whether marijuana helps treat epilepsy, brain tumors, Parkinson's disease and post-traumatic stress disorder. Some of the studies still need federal approval.

Though the awards are relatively small, researchers say they're a big step forward. While several other federal studies currently in the works look at marijuana's health effects, all the Colorado studies are focused on whether marijuana actually helps.

"This is the first time we've had government money to look at the efficacy of marijuana, not the harms of marijuana," said Dr. Suzanne Sisley, a Scottsdale, Arizona, psychiatrist who will help run a study on marijuana for veterans with PTSD. Sisley plans to do her research in private practice after previously working for the University of Arizona.

Dr. Larry Wolk, Colorado's Chief Medical Officer, says the lack of research on marijuana's medical value leaves sick people guessing about how pot may help them and what doses to take.

"There's nowhere else in medicine where we give a patient some seeds and say, 'Go grow this and process it and then figure out how much you need,'" Wolk said.

"We need research dollars so we can answer more questions."

Three of the eight research projects, including the veterans study, will still need federal clearance and access to the Ole Miss marijuana. The other five are "observational studies," meaning the subjects will be providing their own weed.

Among the projects poised for approval:

— Whether adolescents and young adults with irritable bowel syndrome benefit from marijuana ($1.2 million)

Last year, lawmakers authorized $10 million from reserves for "objective scientific research regarding the efficacy of marijuana and its component parts as part of medical treatment."

(Source: Kristen Wyatt can be reached at http://www.twitter.com/APkristenwyatt)