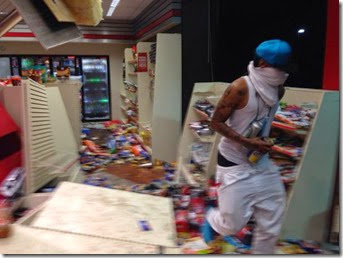 It seems like every time there’s a beef with police in inner city neighborhoods people resort to looting in response.

How does a complaint turn into an illegal shopping trip by protesters victimizing innocent businesses?

This last weekend an unarmed black teen was fatally shot by police in Ferguson, Mo. Riots and looting erupting almost immediately. The FBI stepped in and is also investigating the shooting death of Mike Brown (who was unarmed at the time).

About 32 people were arrested in connection with looting at 12 stores - including one which was nearly burned to the ground.

Why did people turn on the local businesses who had no part in the teens shooting? The incident triggered protests featuring chants of “kill the police.”  I understand the anger. Young African-Americans are all too often victims of trigger happy authorities. 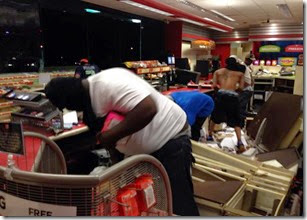 Peaceful protests, like the march being put together by the Rev Al Sharpton, is the best way to redress a wrong. People will pay attention to that and will get the message.

When people mindlessly loot in retaliation for every grievance it takes away from the incident they’re protesting.

All people see on TV is the destruction and thievery. It becomes the main focus for the public which is usually appalled by the violence and senseless crimes.

The injustice/protest message gets lost in the chaos. Television viewers see people of color walking out of stores with whatever they can lay their hands on, and they get a bad impression. How could they not?

The looters are exploiting an opportunity to act unlawfully in a group in an attempt to avoid responsibility for their actions. They wait for an opportunity to loot stores and will exploit any social protest. Others just get caught up in the insanity of the moment and the opportunity to get something free.

If you think I’m bein 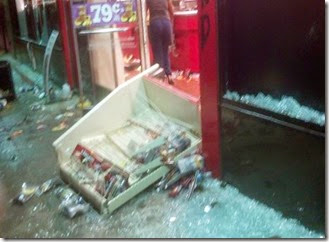 g biased against people of color, consider history. From the Watts riots in the 60s, to the recent St. Louis riots, looting has been a component in the protests.

Not that blacks don’t have reasons to protest. They do. Unequal criminal justice for starters.

But that’s not a reason to victimize someone else. Stealing from others is a moral and physical crime. I don’t care how poor a person is, theft is wrong.

When the rest of the country looks on and sees wanton destruction by a mob of African-Americans, they quickly develop a bad stereotype.

Racism rears it’s ugly head at moments like this – feeding upon the negativity. I wish those looters could understand that.

How they’re hurting the majority of their race in the school of popular opinion, with such senseless destruction and thievery.

Was that free TV really worth it?

Well said Dave. For the life of me, I will never understand looting in the aftermath of murder by police.
But when you have omnimpotent authority armed to the teeth, and a court system working hand in hand with the police; one can start to see the futilty of the situation.

Thanks for commenting Jeff, and sharing your feelings on the subject.