Pterosaurs Aren’t Dinosaurs, but They Sure Are Close 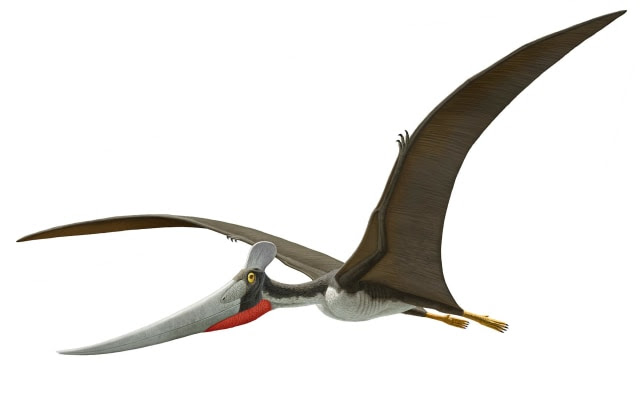 “Pterosaurs: Flight in the Age of Dinosaurs” recently opened at the American Museum of Natural History today, putting the spotlight on flying creatures that went extinct 66 million years ago.

You have a while to check it out — it runs until January 2015 — but if you don’t make it, here are some facts to tuck away in case you find yourself at a dinner party with a paleontologist.

But they are close relatives. The flying reptiles diversified into more than 150 species over their 150-million-year reign over the skies.

Their Bones Are Extremely Rare

Hollow, light-weight bones might have been great for flight, but they don’t keep well over millions of years.

“I have been excavating fossils in the Gobi Desert for 25 years and I have collected thousands and thousands of dinosaur bones,” Mark A. Norell, chair of the museum’s division of paleontology, told NBC news. “I have only collected one pterosaur bone in that entire time.” They Probably Took Flight By Leaping Into the Air

While pterosaur fossils are rare, recently, computer models have helped scientists understand how the animal might have moved.

Before, some people theorized that they climbed up trees and took off from there, or ran to gain some momentum and then lifted their wings.

A computer model by Michael Habib, an assistant professor of biology at Chatham University, however, showed that they probably just had some mad hops.

“Habib’s evidence is pretty, pretty good that they were able to take off with an explosive jump into the air,” Norell said. “Then, they put out their wings and could generate enough lift with one downstroke to take off."

They Probably Weren’t Too Graceful on Land

Previously, some scientists thought they might have walked on two legs, like a pigeon. Turns out they probably walked on all fours, kind of like a bat. (More here and video)