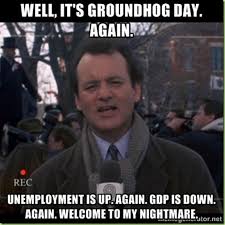 Have you seen the movie “Groundhog Day?”

Bill Murray played a great part as a man who wakes up every day and experiences the same routine. Kind of an eternal life (or damnation depending on how you look at it).

The Republican Party is stuck on a hamster wheel over ObamaCare with no end in sight.

That’s because the GOP-led House of Representatives voted on (and passed) their 50th effort to repeal, defund, or dismantle the health-care law Wednesday. Amazing isn’t it? The worst part is they’ll probably continue to try and dismantle our health care system forever if someone doesn’t make them face reality.

It’s like watching Alice fall down the rabbit hole but not reaching bottom. How can these clowns go to bed at night knowing that people voted for them to help advance this country? And, to serve the people?

The morons are so stuck tilting at windmills – a law is a law, get over it for God’s sake – that they’re willing to waste time and money on behalf of special interests and draconian ideologies – and not worry about the people that voted them into office.

It’s no wonder that the House of Representatives has become a playground for politicians playing up to special interests and idiot ideologies…voters just haven’t woke up yet, aren’t paying attention, or they just don’t give a damn anymore!