Beware the Ides of March – Julius Caesar didn’t and look what happened to him! 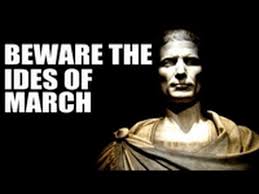 Some people consider March 15 as a bad luck day. It sure was for Julius Caesar. It’s just another day to me. Here’s what happened this day in history:

The Ides of March is a day on the Roman calendar that corresponds to 15 March. It was marked by several religious observances, and became notorious as the date of the assassination of Julius Caesar in 44 BC. The death of Caesar made the Ides of March a turning point in Roman history, as one of the events that marked the transition from the historical period known as the Roman Republic to the Roman Empire.

As many as 60 conspirators, led by Brutus and Cassius, were involved. According to Plutarch, a seer had warned that harm would come to Caesar no later than the Ides of March. On his way to the Theatre of Pompey, where he would be assassinated, Caesar passed the seer and joked, "The ides of March have come," meaning to say that the prophecy had not been fulfilled, to which the seer replied "Aye, Caesar; but not gone."

This meeting is famously dramatized in William Shakespeare's play Julius Caesar, when Caesar is warned by the soothsayer to "beware the Ides of March." The Roman biographer Suetonius identifies the "seer" as a haruspex named Spurinna. (via Wikipedia)