RIP George Thorton: The Man who Blew up a Whale on the Oregon Coast 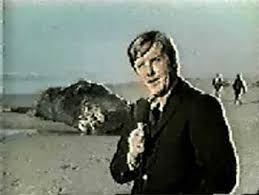 I just returned from Vietnam in November 1970, and was watching television when I saw a news story that made me laugh so hard I thought I was going to have a heart attack!

Note: I was a combat engineer - Enemy Ordinance Disposal (EOD) – and knew my way around explosives. When I saw a sudden news break that some guy was going to blow up a whale with dynamite nothing could have dragged me from the room!

Eyes riveted on the tube, I watched reporter Paul Linnman (KATU-TV) standing near a dead whale on the Oregon coast as he explained how the country was going to get rid of the carcass. It was November 12, 1970. As I watched incredulously, there was a sudden boom and sand sprayed upwards with whale bits that covered the entire area – people, cars and buildings!

It was a miracle no one died.

The man who blew up the whale, George Thorton, died yesterday. I was surprised to find out he passed here in Medford, Oregon. I’ve only been a resident of Medford for six weeks, but I wish I would have known he lived here. I would have tried to see him. Not to interview him, but to ask him questions like how he arrived at the figure of 20 cases of dynamite?

George Thorton, for better or worse will always be remembered for the biggest bang of his career, and he will live forever in YouTube infamy. I think he got a bad rap and was left holding the bag on the whole incident. Sure would of liked to ask him if that’s what happened.

About the reporter Paul Linnman; after the news report aired, Thornton did not stay in touch with him. He’s now 66 and working as a news talk radio host. Linnman reached out to Thornton when he wrote a book entitled "The Exploding Whale and Other Remarkable Stories from the Evening News" in 2003 and on various anniversaries of the explosion, but the only response he got from Thornton was: "No, it seems like whenever I talk to the media, it blows up in my face." 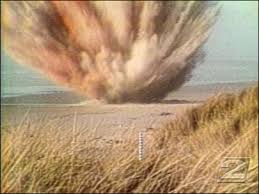 "I'm confident that it will work. The only thing is, we're not sure just exactly how much explosives it will take to disintegrate this thing so the scavengers  — seagulls, crabs and whatnot — can clean it up," Thornton, wearing a hard hat, told Linnman on-camera minutes before the explosion.

It didn't go as planned.

Bystanders were moved back a quarter of a mile before the blast, but were forced to flee as blubber and huge chunks of whale came raining down on them. Parked cars even further from the scene got smashed by pieces of dead whale. No one was hurt, but the small pieces of whale remains were flecked onto anyone in the area.

"The pieces that went into the air were of all sizes. The piece that flattened the car was about coffee-table size. But blubber is so dense that a piece as big as the tip of your 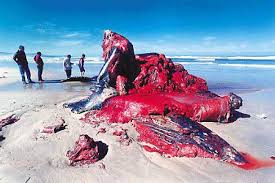 finger can be like a bullet and kill you," Linnman said. "I'm so happy and so thankful that nobody got hurt, nobody got killed, because I don't think this thing would have lasted all these years had it been a more serious incident than it was."

To make matters worse, a large section of whale carcass never moved from the blast site at all. In the end, highway crews buried all the pieces and particles of the whale.