I’m funny about some things.

If I even suspected my house was in sinkhole heaven, I’d move! Residents of Florida live with the knowledge their house, boats, swimming pools, and even themselves are subject to suddenly disappearing into the earth!

You go to bed on nice level ground, and wake up in a giant hole in the earth…if you’re lucky. One poor individual – about a year ago – didn’t wake up when he and his bed dropped into a cavernous hole never to be seen again despite the efforts of would-be rescuers. 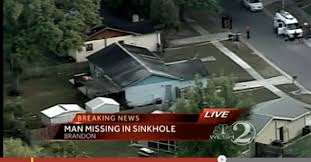 Why would anyone live in an area like that? I suppose the same can be said about people who live in tornedo alley – that collection of states that gets clobbered annually - or along the Gulf Coast. Some people may think California is dangerous. earthquakes are no joke.

As a transplanted Oregonian, I thought I was living in the safest possible place in the country. Turns out, scientists say Southern Oregon is going to disappear some day when an expected massive quake strikes!

Despite that possibility, I’ll take my chances here. I suspect the odds of dropping down a gaping hole in the earth are higher in Florida. Here’s the latest example of disappearing real estate in the Sunshine State:

Another large sinkhole has formed in Florida, causing parts of two homes to collapse and swallowing a boat and a backyard pool.

The sinkhole in Dunedin, Fla., erupted early Thursday morning between the two houses, and by noon, had grown to a size of about 70 feet wide by 53 feet deep.

"There was apparently some work being done to try to fill in what they thought was a sinkhole beneath the house the last couple of days," Dunedin Fire Chief Jeff Parks said. "The owner woke up this morning at 5:40 when he heard noises on his back porch and went out and found the sinkhole at that point."

Six houses in Dunedin — a city on central Florida's west coast — were evacuated, and power and utility lines were cut after officials arrived. The engineering company that was working on the house earlier in the week was also on the scene, waiting for the ground around the sinkhole to be stable enough for them to work to fill it.

"They thought it would slow down to the point where it would stop, but in the last half hour, it's still continued to grow," Parks said. "They're just assessing right now to see what they can do."

Sinkholes are relatively common in Florida, but do not always cause major disruption or injuries. In February, a Seffner, Fla., man was killed when a massive sinkhole opened up underneath his family's home.

Engineers had been pouring grout into the house's foundation for the past two days, Michael Dupre told BayNews9.com in Florida.  read full story here