Rush Rewrites History the Way he’d Like it to be in New Children’s Book!

He’s not satisfied with the current group of racists and rednecks he attracts, so now he’s going after the next generation! What’s scary is those extremists will force feed their young on Rush’s propaganda, assuring a continued dummying-down of another generation in America.

The book follows the time-travel adventures of Rush Revere, a character that adorns Limbaugh’s line of iced tea known as Two If By Tea. The character is cast as a “modern-day Paul Revere who rides around America espousing fundamental American values.”

For the purposes of the book, however, Revere is a substitute middle school teacher who travels with a couple of students back in time to meet the Pilgrims aboard the Mayflower. Revere is also accompanied by a talking horse named Liberty.

Though Limbaugh insists the book isn’t about politics, he said the inspiration to write it came from a belief that children aren’t “learning about the greatness of America.” 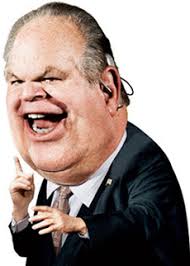 at Rush means is we now teach history as it really was and not the fantasy world depiction the baby boomers grew up with. You remember that don’t you? I spent a good part of my childhood believing Indians were the bad guys.

“I lament what's going on in schools all the time,” he said. “But this is my way of doing more than what I'm doing now. It is a way of teaching what isn't being taught.”

And that would be lies. Rush’s interpretation of anything is a cartoon version of the good guys versus the bad guys as seen through his eyes. His vision of the Pilgrims coming to America and helping the stupid savages who lived here is bound to be a classic.

The book is called "Rush Revere and the Brave Pilgrims: Time-Travel Adventures with Exceptional Americans." It’ll be released this fall.

It’s time for me to walk on down the road…