Growing up I use to watch “Engineer Bill,” a kid’s show where you played this little game with your milk.

When Engineer Bill turned on the green railroad sign for “Go,” I’d rapidly slurp down my milk! When he changed it to the red sign, I’d stop drinking (mid-gulp) and firmly set my glass down.

Trains were fun growing up. I still remember my Lionell Train Set that I got for Christmas in 1956. I wore my train conductor hat with pride and spent countless hours watching it go around the oblong track. Those were the days.

Nowadays, I see trains in a slightly different way. I dislike having to wait for one to to pass in my car. Especially when it’s two miles long! But, that’s not too bad. What’s disturbing about trains today is the loads they’re carrying. In specific, cars that carry oil and ethanol, known as DOT-111.

When one of those babies get in an accident all hell literally breaks loose! A dramatic example happened this summer in Quebec, killing 47 people. Here’s a story that should concern all Americans – especially if you live near railroad tracks! 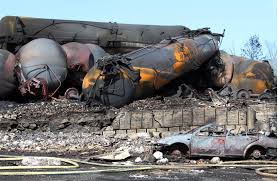 The number of freight trains carrying oil across America has soared in the past five years, but federal officials warn that the massive steel tank cars that carry most of that oil through towns and past schools – the same cars that exploded in Quebec this summer, killing 47 -- may be unsafe and prone to rupture.

For two decades, federal officials have warned that the tank car that carries oil and ethanol, known as the DOT-111, has a serious design flaw and can split open in an accident, turning a derailment into a fiery catastrophe. At least five times since 1991, the National Transportation Safety Board (NTSB) has raised concerns about the car’s design, including its relatively thin metal skin and the possibility that cars could tear holes in each other during accidents, creating a domino effect of spills. Full story here

It's quite evident you blow up your Lionel Trains along with Gomez Addams ... their are millions of tank and freight cars safely moving billions of tons of cargo every year.

These are American Jobs and god we need more of them. It is sad that these accidents happen, perhaps Congress should support new regulations, and the folks that enforce them, that could prevent these accidents from happening.

I hope your move went well and your back is feeling better.