As It Stands: Sanjay Stands up for Pot - ‘We’ve Been Mislead’

Just when I was wondering if any progress would ever be made after the Supreme court’s moronic decision not to recognize it’s medicinal values, along comes some good news!

A notable neurosurgeon discovers what it can do for people with epilepsy and completely reverses everything he’s said for years on TV about it being bad! More news like this will force the feds to give in to some sane marijuana policy some day…I’m just not sure when.

“We have been terribly and systematically misled for nearly 70 years in the United States, and I apologize for my own role in that.” - Sanjay Gupta

Who is Sanjay Gupta?

Sanjay Gupta is an American neurosurgeon and an assistant professor of neurosurgery at Emory University School of Medicine and associate chief of the neurosurgery service at Grady Memorial Hospital in Atlanta, Georgia. 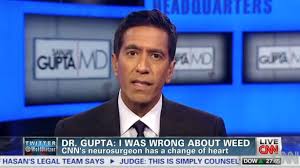 Why Did he Make Headlines on Marijuana Last Week?

CNN's chief medical correspondent announced his change in heart Aug. 8 in an online op-ed, Why I Changed My Mind on Weed, promoting his specialWeed, a documentary premiering tonight at 8 p.m. on CNN.

Gupta says he used to oppose the use of medical marijuana. But after more research, he says he has changed his mind, and has apologized for earlier statements, including his 2009 TIME magazine article Why I Would Vote No on Pot. Story here

Dr. Sanjay Gupta's views on medical marijuana are evolving. In a candid admission, CNN's chief medical correspondent wrote an op-ed this week, "Why I Changed My Mind on Weed," explaining that he reevaluated his stance on the use of marijuana in certain medical treatments. Story here 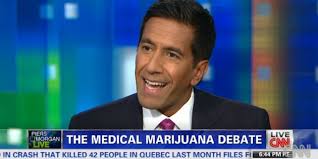 Dr. Sanjay Gupta, CNN’s chief medical correspondent, apologized for his previous anti-marijuana stance after spending a year reporting on the subject. His findings are highlighted in a special called “Weed” that debuted Sunday and will be rebroadcast on Friday at 10 p.m.

Gupta called his research “stunning” and posted a mea culpa on the CNN website, “Why I changed my mind about weed.” In 2009, he wrote a piece in Time magazine explaining why he thought marijuana should not be legalized. While Gupta doesn’t specifically espouse legalization, he said he finds plenty of positives about cannabis.

“We have been terribly and systematically misled for nearly 70 years in the United States, and I apologize for my own role in that,” he wrote. “I hope this article and upcoming documentary will help set the record straight.” Story here