As It Stands blog: Why Weiner will win…he has balls! 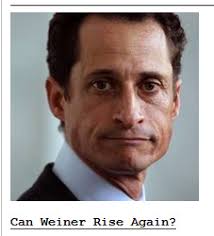 You have to hand it to the “Weiner,” the guy has balls! You can’t keep a creep down, or something like that.

Voters are getting a taste of the New Weiner and have supported him thus far.

New York City mayoral candidate Anthony Weiner, who resigned from Congress in 2011 amid a sexting scandal, admitted Tuesday to more sexually charged Internet shenanigans.Two months after he announced his return from political exile to run for his hometown's biggest job, he was near or at the top in several polls — despite a barrage of pun-filled front-page headlines focusing on his salacious history.

It’s too early to see what kind of impact this latest revelation will have on the wonderful world of Weiner, but I suspect his fans won’t castigate/castrate him because…well, because they think it’s cool to have a pervert politician who peers down his underwear!

Let’s face it…voters know what they’ll get if they elect the “Weiner.” No one will be shocked when he’s caught wiggling his weiner at some woman other than his wife.

Right now the “Weiner” is enjoying his second coming!