As It Stands: Bugging out: views on insects in the news

By Dave Stancliff/For The Times-Standard
Why is it that most of my life I haven’t been aware of monster-sized mosquitoes, giant rat-sized snails, and insects like Cicadas that wake up after 17 years and eat everything in their path?
I don’t know about you, but lately some of the insect and other pest stories I’m hearing sound like something straight out of the Bible; “And the locusts descended upon Egypt…”
Are these pest reports signs of the end times? I doubt it, but they have a certain Armageddon-like aspect that makes for top news slots when they decide to invade an area.
The most recent insect invasion is in Florida where monster mosquitoes are tormenting tourists with bites so powerful they go right through clothing and feel like a pinch. A big pinch!

These special mammoth-sized mosquitoes are called Gallinippers by scientists, and pains-in-the-butt by tourists and locals. The only good news about these oversized pests - they’re 20 times the size of a normal mosquito-is they don’t carry diseases harmful to humans like their tiny cousins.
Entomologists warned us earlier this year that the B-29 of the buzz world would be active this summer.

They say it’s happening because of tropical storms Debbie and Andrea, which hatched a bunch of dormant eggs (they can stay that way for years) and produced hundreds of thousands of these Quetzalcoatl 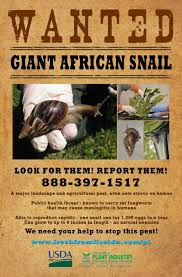 us-like (biggest bird ever-30 feet, 200 pounds) species of the insect world.
The next example is the giant rat-sized snails (Giant African land snails) that overran Florida streets in April, eating anything green in their path. The seven-inch long pests also like to eat stucco (which contains calcium -vital for a healthy shell!), which as you can imagine doesn’t make them popular with people living in stucco houses.

Just one of these behemoth snails produces up to 1,120 eggs a year. They’re also a motorist’s nightmare because their hard shells can blow out tires on cars! If that isn’t bad enough, they also carry a parasitic lungworm which can cause illness in humans, including a type of meningitis.
No one knows for sure how the infestation started. One possible source is practitioners of Santeria, a religion with West African and Caribbean roots, who use the giant snails in some rituals.
The giant snails also showed up in Houston, Texas in May. The Center for Disease Control didn’t seem too concerned because they said humans will only get infected if they eat them raw or undercooked. And not that many showed up. There was a story of some woman who found one in her garden and it made front page news - “Snail Invasion?” The invasion never came, but was a fun topic to talk about.
And how about those sleepy Cicadas?
Those bug-eyed insects look like little aliens from outer space. They started their food drive in the south, but have worked their way up north, causing havoc.

The advance of the Cicadas was called “Swarmageddon” and residents in New Jersey have two different takes on the infestation: on one hand, some people think they’re really cool and sit out in parks playing instruments with Cicadas all over them.

They write poems about the bulging-eyed nuisances.
On the other hand, the barbeque set feels under siege, as the visitors ruin their outdoor cooking experience - a very popular pastime this time of the year.

Normally, experts say, the peak of the Cicada season would have been over by now, but cooler weather has e 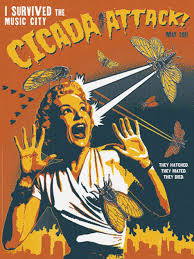 xtended their lives and they’re covering more area than usual. There’s no doubt residents are looking forward to sleepy time for the noisy brood, and a relief from their presence for another 17 years.
All of which brings me back to the question: why are there insect and pest invasions these days? Didn’t people talk about these things back in the 50s and 60s? Did the media miss out on great insect invasion stories for decades before the internet?

It’s too deep for me. I just know it’s bugging me (you knew I’d have to slip this pun in somewhere)! Could be I live a more isolated life than I thought, and I’m the only one who feels like the bugs are getting a lot of media play these days. Then again…
As It Stands, one of these days we’ll have a mutant insect invasion and our lives will turn into B-movies!