As It Stands blog: The hunt for Hoffa continues after 40 years - body discovered?

Four decades have slipped by smoother than a crime don’s voice,and people are still seeking Jimmy Hoffa’s body. His disappearance remains a mystery to this day.

Hoffa wasn't controlled by gangsters, but he certainly was beholden to the mob, which had helped him land the Teamsters presidency in the first place. Hoffa's successor, Frank Fitzsimmons was under Mafia control, according to lawmen, and did what he was told, especially regarding loans to Las Vegas casinos.

Hoffa was a threat to that arrangement. In July 1975, he vanished forever.(Hank Walker / Time Life Pictures /

In the latest chapter of this saga, federal agents are digging in a field 30 miles north of Detroit after getting a tip from a Mafia underboss,Tony Zerilli, that his remains are there. 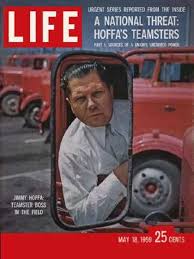 Hoffa, a former president of the Teamsters labor union, was last seen in suburban Detroit in July 1975. He was declared legally dead on July 30, 1982. The property where authorities are searching Monday was formerly owned by Jack Tocco, Zerilli’s cousin.

If this story sounds familiar it’s for good reason. There’s been numerous stories about his body being discovered…but not one panned out.Tons of earth have been moved in the search for Jimmy Hoffa's remains. The following are just a few of the leads that didn't pan out:

What a waste of Taxpayers money.