As It Stands blog: Study says men are the cause of menopause in women!

Fair warning to my male counterparts!

I’ve got some disturbing news that’s probably not going to make life with your wife any easier!

She’s going to run across the following article, or see it on TV, so you might want to go into damage control before the accusations start flying:

“For decades, anthropologists and biologists have been puzzling over one of nature’s great mysteries: Why do women go into menopause?

At first blush, menopause doesn’t make much evolutionary sense. According to one widely accepted theory, the point of evolution is successful reproduction. After that, nature doesn’t have much interest in keeping us alive, and so we die. Why, then, keep women kicking for decades after they can no longer make babies?

Rama Singh, a professor in the department of biology at McMaster University in Hamilton, Ontario, thinks he’s figured it out. Menopause, the Canadian researcher argues, is men’s fault.”

My initial reaction to Mr. Rama Singh’s discovery was anger and a feeling of betrayal! What the hell! What made him take up a study that’s going to put men on the defensive from here on out? Wives will be saying, “I knew it! You drove me to menopause you beast!”

And our only defense is going to be “biological imperative” which seldom stands up in the court of angry women. They were better off vaguely suspecting men were at the root of their menopausal miseries. Now, good old Singh boy has given them

more ammunition in the battle of the sexes!

“I am saying what women have been saying all their lives,” Singh told NBCNews.com. “Men are to blame.”

Singh’s argument relies on one key fact: “Sex is fun,” he says.

In humans, sex isn’t just about making babies, it’s also about pleasure and bonding. Over time, he contends, men found that having that sex with younger women was more desirable than sex with older women, without regard to making babies.

As men began to prize younger women as sex partners, gene variants that led to infertility with advancing age were not eliminated. Menopause became built in, even as women lived longer and longer.” 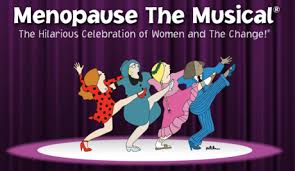 Well, there you have it. Singh mans up to his nefarious deed and claims that men are thinking with their “other head” when it comes to sex, and not really worried about procreating. (There goes that defense!) (Story from here)

Posted by ImBlogCrazy at 6:02 AM