Weiner wants voters to un-remember his weiner in mayoral race

The Weiner is back!

I think Anthony Weiner was encouraged by Mark Sanford’s re-emergence in politics after making an ass of himself while the governor of South Carolina. In any event, the Weiner Man thinks that infamous tweeted crotch shot was a mistake that should be overlooked.

With that kind of gall, I don’t see any reason why he won’t be elected the next mayor of New York City. The guy has already proven he has big cojones (or socks in his shorts) and truly believes he looks the part of Gotham’s next mayor.

I do think his wife ought to monitor his twitter account closely because he could easily revert back to sending the ladies uninhibited photos of himself playing in the mayor’s office! Eeee-youuu!

It’ll be interesting to see if New Yorker’s warm up to Weiner in September when the elections take place.

Here’s the latest on the Weiner Man’s return:

'I hope I get a second chance': Anthony Weiner launches bid to become NYC mayor

“Anthony Weiner, whose career as a congressman collapsed after he posted sexually suggestive pictures of himself on Twitter, has announced that he’s running for mayor of New York City.

“I made some big mistakes and I know I let a lot of people down. But I've also learned some tough lessons,” the Democrat said in a video posted on his website late on Tuesday.

"I'm running for mayor because I've been fighting for the middle class and those struggling to make it my entire life," he added. “I hope I get a second chance to work for you." 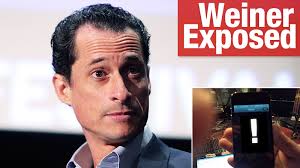 The video, which features his son and wife Huma Abedin, an aide to former Secretary of State Hillary Rodham Clinton, focused on his middle-class roots in Brooklyn.With this bold attempt at a comeback ahead of the primary in September, Weiner is hoping to erase the image of a tweeted crotch shot that precipitated his resignation.

He at first claimed that his Twitter account had been hacked after a photo of an underwear-clad groin appeared on his feed in 2011. But when more pictures came out, the congressman admitted he had exchanged risqué messages with a number of women and soon resigned.

Prior to his 2011 unraveling, Weiner had begun to plan for a 2013 campaign, NBCNewYork.com reported, and he still has more than $4 million in his campaign account.” (For rest of the story & video go here)