Ready for a one-way trip to mars? Some people are! Apply before Aug. 31st 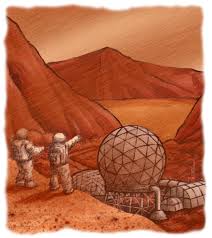 For you old TV program buffs that remember the “The Honeymooners” with Jackie Gleason and Audrey Meadows, I have one of my favorite lines from the comedy today:

Ralph Kramden tells his wife Alice (during one of his usual outbursts),

Audiences laughed every time he repeated those two lines. It was a simpler time and no one seemed to notice that he was threatening to send his wife to the Moon…a place far, far away. Exiling his spouse to a long trip in space was considered hilarious! And the Moon no less!

How about Mars? That far enough? People are ready to pay money to go on a one way trip to Mars nowadays. Yes, one-way…

Hard to believe but this is no comedy. Check out the follow article:

Why sign up for a one-way Mars trip? Three applicants explain the appeal

A one-way trip to Mars sounds like something you'd wish on your worst enemy — so why would more than 78,000 people from around the world pay up to $75 for a chance to die on another planet?

"I can say I have an ulterior motive," said David Brin, who has written more than a dozen science-fiction novels — including "The Postman," which was turned into a Kevin Costner movie in 1997. "I'd get a lot of writing done, and it might be memorable."

As a master of hard science fiction, the 62-year-old Brin knows better than most applicants what the first Red Planet settlers would face if they're sent off in 2022, as the Dutch-based Mars One venture has proposed.

The ages of those listed in Mars One's database range from 18 to 71. All those applicants are facing a long road even before the first four-person crew gets off the planet. Mars One is accepting applicants through Aug. 31. The field of applicants would first be whittled down by panels of experts. Then they'd undergo trial by reality TV, followed by years of training.

"This may sound crazy, but it kind of reminds me of 'The Hunger Games,'" said Kayli McArthur, an 18-year-old student who's one of the youngest Mars One applicants. "It's cool that it would be televised, but that's not my whole thing." (Full story)