The Shock of the Day: Drinking diet soda linked to depression 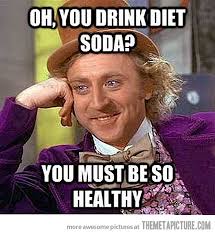 Lately (it seems) everything we eat and drink causes some ill effect upon us. Soda pop has been under extreme scrutiny this past year, and now it turns out even fruit drinks may give us grief. As in depression. No really.

I’m about to lay another one of those studies upon you. As always, I suggest taking the study (like all studies) with a grain of salt. It may be that diet soda is the worst in the soda class. The irony of a diet soda always amused – and disgusted – me. Did the drinkers of diet soda really think believe in the fuzzy math of the soda corporations? C’mon! Seriously?

“Diet drinks may taste good, but they might not bring happiness. A new study finds that people who drink diet sodas or fruit drinks are more likely to be diagnosed with depression.

The study doesn't show that diet drinks and the researchers stress their findings don't provide an explanation. They looked at more than 263,900 U.S. adults ages 50 to 71 who answered questions about their beverage consumption between the years 1995 and 1996. About 10 years later (from 2004 to 2006), the same people were asked if a doctor had diagnosed them with depression since the year 2000.

People who regularly drank four or more cans of any type of soda a day were 30 percent more likely to have received a diagnosis of depression than people who did not drink soda, said  Dr. Honglei Chen of the National Institutes of Health, who led the study. The risk of depression was especially hig

By contrast, people who drank four or more cups of coffee a day were 10 percent less likely to have been diagnosed with depression compared to non-coffee drinkers.” (read the rest here)

Interesting. I drink about a 6 pack of diet soda per day and 2 cups of coffee, so maybe they cancel each other out, because I am not depressed.

You're way too "buzzed" to have time to be depressed with your caffein intake my friend!
Thanks for stopping by,and commenting.
It's always nice to hear from you.