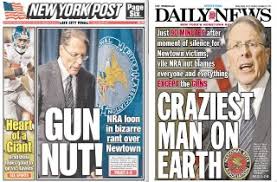 By Dave Stancliff/for the Times-Standard

According to Wayne LaPierre, CEO and Executive Vice President of the National Rifle Association, any attempt at gun control in this country is an “anti-American” attack that threatens all our rights.

Let's back up a moment and take a look at “Crazy Wayne.” He recently lashed out at the national media in the wake of the Sandy Hook massacre declaring, “ ... call me crazy for wanting armed police in schools.”

I call him crazy for even suggesting that his rabid defense of guns is mainstream, and that he represents a majority in this country. That's a flat out lie. The NRA has four million members, hardly a majority in America. Furthermore, try polling those NRA members and see what they really think about compromising on gun control for the sake of their own families.

”Crazy Wayne's” main point, when addressing the press after this latest tragedy, was that the NRA would not even begin to think about compromising on gun control laws despite the increasing mass murders in our country. Flat out. Period. No compromise.

Don't be too surprised by “Crazy Wayne's” unyielding stance. The guy gets a million dollars a year to just say no. But it's deeper than that. He's a fanatic. All you have to do is turn the clock back to 1993 in the aftermath of Waco, and later the Oklahoma City bombing to see that .

Former president and avid NRA member George H.W. Bush was so enraged over “Crazy Wayne's” anti-American stance after Waco and the Oklahoma City bombing, that he publicly resigned his membership in the NRA. 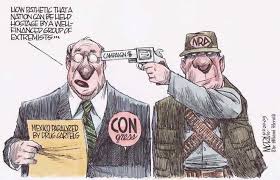 arily involving the Bureau of Alcohol, Tobacco, and Firearms (ATF). However, there was one section of the letter that offered a more sweeping condemnation of federal law-enforcement efforts.

Once again the “jack-booted thugs with Nazi helmets” theme was repeated and “Crazy Wayne” claimed that under the Clinton Administration, “ ... if you have a badge, you have the government's go-ahead to harass, intimidate, and even murder law abiding citizens.”

Even before President Obama was elected the first time, “Crazy Wayne” warned his membership that there was a conspiracy, and Obama would take their guns away.

You may remember there were record gun and ammunition sales right after Obama was elected. You can thank “Crazy Wayne” for that. I wonder if his corporate cronies gave him a bonus?

Despite his doomsday warning, Obama didn't pass one gun control law. If anything, he extended rights for gun ownership and armed our rangers in federal parks. It didn't matter though. “Crazy Wayne” kept beating the drums through this last election cycle with the same dire warnings of a coming apocalypse for gun owners if Obama was re-elected. 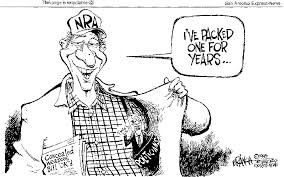 I call him “Crazy Wayne” for a reason. Based upon his own actions, the man is an extreme, unyielding fanatic who cares more about his twisted ideology and his allegiance to the corporations that produce weapons and ammunition, than he does about the American public's safety.

Once the NRA stood for gun safety. It still offers state-of-the-art gun safety classes for shooters of all ages. But common sense in other matters seems to have deserted it's leadership.

Under “Crazy Wayne” people wonder how any kind of gun control legislation can be passed when the NRA lobby is flush with corporate bucks, and has paid buddies in both houses.

However, I learned one thing from this last presidential election that gives me hope. Super PACS and million dollar donations from wealthy individuals couldn't buy the Presidency. Therefore, even “Crazy Wayne's” efforts to advance the NRA's power are eventually doomed to fail. Perhaps 2013 will be that year when the majority of people will have their say.

As It Stands, Americans demand change in our gun laws. The senseless slaughter of 20 children and six teachers with an assault-style weapon was the last straw.