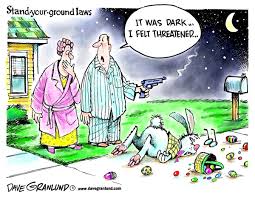 It’s bad enough that we have crazed mass murderers mowing people down with assault rifles without passing out concealed gun permits to “head cases” who shoot people and then try to use stupid laws like Florida’s, “Stand Your Ground” law, to justify what they did.

There’s stories every day about how this law gets abused. Here’s the most recent one:

“Florida's controversial "Stand Your Ground" law has been cited in hundreds of cases. People have used it to justify shooting, stabbing, killing and maiming would-be intruders, romantic competitors and rival gang members.

And on Sunday, at a pizza joint in St. Petersburg, a man tried to use it as justification for shooting another customer who was yelling at workers because he wasn't getting his order fast enough.

Police said the incident unfolded about 4 p.m. inside the Little Caesars, 3463 Fourth St. N, after Randall White, 49, got mad about his service. Another man in line, Michael Jock, 52, of St. Petersburg admonished White. 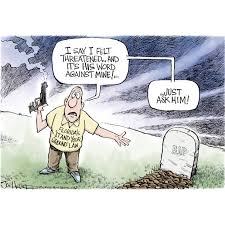 That "prompted them to exchange words and it became a shoving match," said police spokesman Mike Puetz. White raised a fist. Jock, a concealed-weapons permit holder, pulled out a .38 Taurus Ultralight Special Revolver.

One bullet lodged in a wall in the restaurant, which was occupied by at least two other people. After the shooting, both men went outside and waited for police. Jock told officers the shooting was justified under "stand your ground," Puetz said.

"He felt he was in his rights," Puetz said. "He brought it up specifically and cited it to the officer."

He told officers he feared for his life. He mentioned that he thought White had an object in his hand, then backed off that when officers pressed him. Florida's "stand your ground law" says people are not required to retreat before using deadly force.

"We determined it did not reach a level where deadly force was required," Puetz said.

Police arrested Jock on charges of aggravated battery with a weapon and shooting within a building. He was released from jail on $20,000 bail.

Jock told the Tampa Bay Times he was meeting with a lawyer today, but declined further comment. White was treated at Bayfro 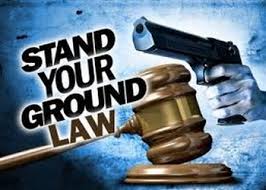 nt Medical Center and released. Reached by phone Monday night, he said he felt lucky to be alive. He was also angry.

"There are arguments every day, but how many people pull out a gun? When you pull a gun out and shoot somebody, your life better be in danger," White said. "He was in my face and I pushed him. His life was not being threatened."

White said he got mad because his thin-crust vegetable pie was taking longer than the 10 minutes he was promised. "Twenty minutes later, I'm like, 'Where's my pizza?' " White said.

White, who admitted he was tired and agitated, started talking about the service. That's when he said Jock "started chewing me out."

White said the gun came out quickly. A shot rang out. The two men wrestled for the gun before the second shot was fired. White said he still has a bullet fragment in his back.

"I got lucky," he said. "To me, that stand your ground rule … people are twisting it. He's twisting it. I walked in to get a pizza and I got shot … I'm hoping the law prevails. We'll see." (Source)