Blogging on The Lakers: my coverage of last night’s game with the Warriors 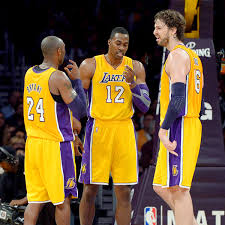 They were coached by the assistant coach Ernie Bickerstaff because head coach Mike Brown was fired! Losing is not acceptable in Laker Land. Especially after putting together a lineup this year that should be undefeated. The naked reality was one win and four losses. The hybrid-Princeton Offense that Coach Brown seized upon to lead the team with this year was a complete failure. Poison.

Nash should have been doing pick and rolls with Howard until the sun set... not slogging through a pass and read offense that didn’t allow for his strengths. Of course, he only slogged through one full game and was injured in the second. Who knows when he’ll be back after sustaining a leg injury?

I’m writing this as I watch the game between The Lakers and the Golden State Warriors. It’s the start of a six game homestand for the Lakers. A chance to enjoy home cooking with lot’s of wins. They took a nine point lead into the locker room at halftime. 38-47

They didn’t look great, but at least they didn’t appear to be as confused and played some good defense. The offense was spotty, but Darius Morris hit a couple of 3s and the Lakers got good contributions from the bench – especially from Jordon Hill.

Second half. Lakers are scoring easily. More importantly… their defense is getting better. I actually saw Kobe and Howard both smile after a time out was called in the 3rd quarter. They hasn’t been much to smile about in Laker Land lately with the losses looming like the end of the world! Laker management – Jim Buss – did the right thing. This team already looks better. Still the 3rd period. Lakers hit back-to-back 3s. Morris and Metta Peace. Lakers lead 72 – 55 at the end of the period. A 19 point lead.

Just like that. This game looks to be a blow out. I’m impressed with the contributions coming from the bench. Especially Morris and Hill. There’s an energy going with the team tonight. Starters and bench. The Warriors are starting to lose their cool. Green tried to pick a fight with Gasol. It’s getting chippy. Hill is really looking good. Fighting for rebounds and scoring.

It’s official. The Lakers got their swagger back. Funny how things can change when there’s a big change. The crowd is standing…cheering as Kobe stuffs the ball on a fast break. Jordon puts another basket in after collecting another offensive rebound. For the moment, Laker fans are happy. The team looks dominant. It’s a good thing too. If the Warriors would have won in Staples it would have been the low point of an already low season.

The Lakers are pulling out their starters now. The equivalent of the fat lady singing. Running up a flag of victory. Firing a 21 gun salute. Now it’s garbage time. The second stringers battling it out as the minutes wind down. The Lakers win 101-77. A complete beat down. Something you’d expect from a team with this much talent.

Just wait until they get a coach! (Rumor mill: Phil Jackson might return)