Wasteful spending of your tax dollars: Martian menus, the “non-profit” NFL, and a $132 million do-nothing Congress 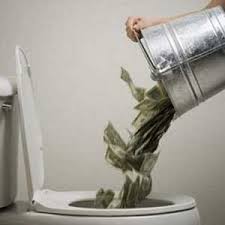 Think Congress does not have much to show for itself this year? Think again. A new report from Senator Tom Coburn's office highlights dozens of examples of government waste in 2012. Included for the first time on this list: Congress. The very people looking into government waste find they themselves are wasteful. Coburn's report estimates $132 million of taxpayers' money was wasted on "the most unproductive and unpopular Congress in modern history."

"The waste is unbelievable," says Coburn. "We're bankrupt, this country is bankrupt, and people just don't want to admit it."

Loopholes are part of the problem. The National Football League, for example, pulled in more than $9 billion last year, yet is technically a "non-profit" organization, costing the federal government tens of millions of dollars every year in lost revenue.

"We have some of the biggest corporations in America paying no taxes whatsoever, you know something is wrong with the code," says the Republican senator. Millions of dollars have also been spent on questionable items, like $325,000 on a squirrel robot, realistic enough to fool a rattlesnake, and developed with a National Science Foundation grant; $40,000 to produce a video game where players can virtually enjoy a pond in Massachusetts; and $516,000 to create a video game called "Prom Week," which simulates the interaction of teenagers surrounding the biggest social night in high school.

The spending approaches intergalactic proportions -- sort of. NASA has no plans for a manned mission to Mars, but is spending nearly a $1 million a year researching what kind of food astronauts could eat if they ever get there. "What was once a great country has been mortgaged and bankrupted by the egos and ethics of career politicians," says Coburn, who adds the only way to change the system is to vote out all the incumbents.

"If you want to change the trajectory of our country, if you want to get rid of the hundreds of billions of dollars of waste every year, you have to change who is there." For more examples of government waste, including another highly-subsidized, yet rarely-used airport, check out this week's Spinners and Winners. (source)