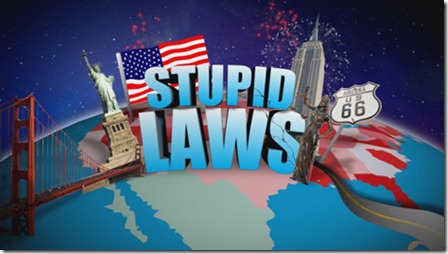 Just for fun, let’s look at some stupid laws in Ohio as it’s in the news a lot this week.

President Obama and Gov. Romney are busy kissing babies and shaking hands in the state right now hoping to get undecided voters to vote for them.

Everyone is talking about how important the Swing States are in this year’s presidential election, but I’m taking the opportunity to share some stupid laws from these states…just because:

In Ohio, if you ignore an orator on Decoration day to such an extent as to publicly play croquet or pitch horseshoes within one mile of the speaker’s stand, you can be fined $25. Full text of the law.

It is illegal for more than five women to live in a house. Full text of the law.

No one may be arrested on Sunday or on the Fourth of July. Full text of the law.

In Akron - No person shall solicit sex from another of the same gender if it offends the second person. Full text of the law.

In Bexley - Ordinance number 223, of 09/09/19 prohibits the installation and usage of in outhouses.

In Cleveland - Women are forbidden from wearing patent leather shoes, lest men see reflections of their underwear and, It’s illegal to catch mice without a hunting license!