As a Vietnam veteran, I’m distressed to see that our Iraq and Afghanistan veterans are facing the same stigma we were: discrimination against veterans with PTSD. Of course back in my time no one was talking about PTSD – it was an unknown subject – but veterans who came back and had problems adjusting to civilian life quickly became stigmatized.

A small amount of these thousands of returning combat veterans became violent and “freaked out” – killing innocent civilians. The media at the time seized on the idea of “crazed killer vets” roaming America’s streets and terrorizing people.

One thing really stands out to me; back in the early 70s, after I got out of the Army, I made sure not to mention my military service on job applications, unless specifically asked. The stigma of being a “crazed vet” would have hurt my chance at getting a job. I saw it happen to too many people that I actually knew who couldn’t find jobs because they mentioned they served in Vietnam during interviews.

That’s why I was so distressed when I read this article. It’s all happening again. When the hell will we learn? Our warriors deserve better. Read about how hard it is for our veterans to get jobs compared to the rest of society.

“A think tank convened to gauge the financial well-being of “workplace warriors” says home-front job prospects remain “discouraging” for ex-service members, with many hiring managers seemingly scared off by the possibility that candidates have post-traumatic stress disorder.

For even casual watchers of the ex-military vocational plight, the larger conclusion is hardly striking: the “combat-to-corporate” path has long been paved with good intentions, but clogged by application dead ends. What’s more, the group’s downbeat assessment comes amid some rays of improvement. Last month, the unemployment rate for post-9/11 veterans finally nudged lower, to 9.7 percent, two full points below the jobless pace during than the same month in 2011, according to federal figures.

But, the experts contend, too many American companies have failed to boost their own internal ranks of former troops, ignoring the military-friendly examples set by Walmart, the Hartford, Citi and several other businesses under the "hire our heroes" mantra.

"Few employers are fully prepared to meet the needs of disabled veterans in the workplace, according to research from Cornell University and the Society for Human Resources Management," think tank members wrote.  "... Nearly 20 percent of service members returning from Iraq and Afghanistan screened positive for PTSD." (That reported military-PTSD rate has decreased during the past five years, Cornell scientists have found, noting the drop is due largely to interventions by the U.S. military.) 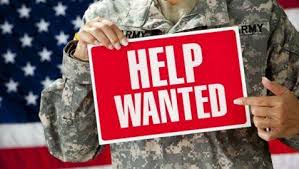 arriors Think Tank, composed by business, military and health leaders, originally gathered in 2007 — before the Great Recession — to examine the same lag in ex-military hiring. Since then, the nation’s slow economic recovery has sidelined tens of thousands of veterans along with millions of other American workers. “But I’m sure, in the case of some employers, the economy is an excuse for them just to say ‘no’ to veterans,” said the report’s editor, Marcia Carruthers.

And while the think tank does see threads of tangible progress in the private sector, such as the 100,000 Jobs Mission, it added that: “The fruits of these efforts have yet to fully materialize. More needs to be done” to open opportunities for civilian soldiers and full-time military members.

In large part, that’s because just below the simple math of supply and demand, a dark group-psychology seems to be at play, Carruthers said. Battle-related mental illness — diagnosed in some returning veterans but apparently associated with all of them — is tainting many or most job-hunting veterans.

“The stigma of PTSD is at the top of the list,” said Carruthers, president and CEO of the Disability Management Employer Coalition, a nonprofit.

“These veterans are exactly the kinds of people you’d want to hire — they’re used to working as a team; they’re loyal; you give them an order and they follow through,” Carruthers said. “So some of this is related to the types of injuries we’re seeing — and, I would say, really, due to the fear of employers in terms of bringing back these people. If they were coming home with broken legs, it would be a different thing. There’s a fear factor.” 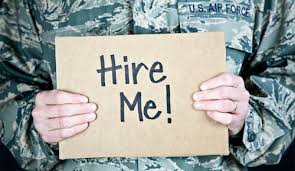 Among veteran-friendly companies with representatives on the think tank are insurance provider MetLife and technology consultant Booz Allen Hamilton. While some large U.S. companies are clearing space to bring veterans in house, it’s the “smaller organizations that often struggle,” Carruthers said.

“They don’t have many employees, and not many of their people have been deployed. They also may not have HR departments that are aggressively seeking diversity,” she added. “So it’s more the smaller organizations that are just not as aware of this issue — or that don’t feel they have the resources. But it’s small business that definitely make up our economy.” (article source)