This rapidly developing “printing technology” would have left Flash Gordon in shock.

It sure blows my mind. Actually printing solid objects. This new story points out this technology is going to bring a lot of legal challenges…soon.

It kinda creeps me out thinking about untold thousands of people printing up guns for themselves. I foresee a big problem with that. See what you think.

“After raising thousands of dollars to develop a free, 3-D-printable handgun, a group calling itself Defense Distributed has had to put its plans on hold, after the company providing their printing hardware refused to do business with them. It's an early episode in what is likely to be a long controversy.

Defense Distributed is a loosely organized group that intends to explore the possibility of creating weapons entirely using 3-D printed parts — and providing the files to do so freely online. They are unrelated to another recent project that partially built an assault rifle that way, but the concept is similar.

The group originally tried to raise money to develop the Wiki Weapon, as they call it

, on the crowd-funding website IndieGoGo. The site pulled the plug, however, before the $20,000 the group was hoping to collect was pledged. Undeterred, Defense Distributed solicited donations in the Bitcoin virtual currency, and soon achieved their funding goal.

With the money, they leased a powerful 3-D printer from a company called Stratasys. But before they even had a chance to take the device out of its box, Stratasys caught wind of what its hardware was going to be used for and canceled the contract, sending someone to pick up the printer immediately.

Defense Distributed's Cody Wilson had expected some controversy, but the cancellation by Stratasys caught him by surprise. Speaking to Wired's Danger Room blog, he emphasized that what the group is doing is legal, since manufacture of weapons is not prohibited as long as they are not for sale or trade. This permits enthusiasts and artisans to create such things freely, but for anything more than personal use a license is required — a license Wilson doesn't have.

Stratasys may have erred on the side of caution (it commented to Wired that the company would not "knowingly allow its printers to be used for illegal purposes"), but it may also have been motivated by the equally understandable desire not to be associated with a potentially controversial project.

But as Wilson points out, the cat is out of the bag: The design and testing of a 3-D printed gun is inevitable given that the cost of doing it has dropped, and there is almost certainly a market for such devices. Defense Distributed is doing it openly and, they believe, legitimately — but others could easily do the same without bothering about the red tape. In the meantime, the Bureau of Alcohol, Tobacco, Firearms and Explosives is investigating, though they told Wilson they consider printed weapons a grey area at present. 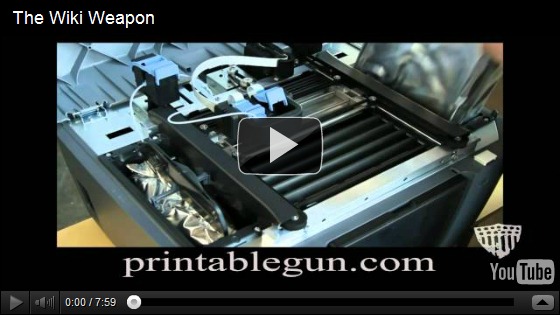 The question of creating weapons at home, especially sophisticated and deadly ones like an automatic handgun, is bound to be a controversial one. The ability to bypass firearms regulations, not to mention the social and civil implications of cheap, ubiquitous and anonymous guns, will be a serious issue in the coming years, and Defense Distributed intends to be at the center of it.

More information about the Wiki Weapon and Defense Distributed's plans and rationale can be found at their website. Readers concerned with the legality and justification of producing printable weapons may find some answers in the FAQ. Devin Coldewey is a contributing writer for NBC News Digital. His personal website is coldewey.cc.