This year some of the crimes committed have been like something out of Zombie movies. In nearly ever case “bath salts” a dangerous designer drug, was involved.

One of the first reports happened on May 26, when Miami police shot and killed a homeless man who was allegedly feasting on the face of another homeless man in a daylight attack on a busy highway.

Before now-infamous "face-eating cannibal" Randy Eugene (bottom photo on left side) was stopped by four police bullets, say authorities, he had gnawed the face of victim Ronald Poppo down to 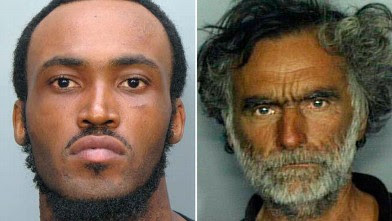 Not long after that another “zombie” like attack happened in a Manatee County, Florida home, after a man under the influence of bath salts went into a fit of rage and bit a piece of someone’s arm off during a visit with his children.

According to ABC News, Charles Baker, 26, got naked, ate human flesh and wouldn’t go down without a fight, according to a Manatee County Sheriff’s Office report.

The latest candidate for Zombie Apocalypse comes from Ohio. A naked, bloody man broke into a home, jumped from a two-story window, tackled a passerby and chewed on her head while "screaming like an animal." The gory scene unfolded Friday night in Hawley, Pa., 40 miles east of Scranton, where 20-year-old Richard Cimino Jr. allegedly went ballistic on a woman and two officers, Patch reported.

Time for me to walk on down the road…carefully!