From The Nuts File: To raise ‘awareness’ man serves up his genitals for dinner 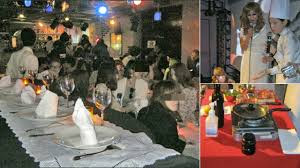 Awwwww nuts! They’re everywhere. Crazy people who do crazy things. Like lopping of their “special parts” to make a point about something.

I’ve heard stories about people giving their all for certain causes, but this one has to be the ultimate sacrifice – short of death.

“You know what they say: Sometimes you feel like a nut, sometimes you feel like cooking your nuts and serving them to paying customers. Japanese artist Mao Sugiyama had his penis and testicles surgically removed, prepared them under a chef's supervision and presented them on plates to five customers who paid $250 for the, uh, privilege. Sugiyama, who says he is "asexual" (or at least he is now), hosted the stunt to "raise awareness about sexual minorities, x-gender [and asexual] people."

The high cost of the meal will apparently go toward his hospital bills. Despite the massive "ick" factor, everything Sugiyama did was legal.We also sincerely hope he offered the diners an after-dinner mint. Or 50.”   (source)

Posted by ImBlogCrazy at 2:50 PM