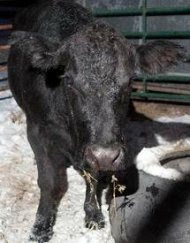 Only four more days until Christmas. Thanks for stopping by this morning. I got the coffee on and a couple of stories to start your day.Enjoy:

It didn't happen overnight, but residents of Plattsmouth, Nebraska have finally outsmarted a deceptive, wayward bovine known as the "Ninja Cow."

"It sounded like hoofs on the pavement, and by the time I could focus on it, all I could see was the rear end of whatever it was," local computer programmer Kevin Moon told the Wall Street Journal.

Wayward livestock can pose serious threats to human and other animals. Even a small deer can destroy a car, seriously injuring the occupants in a collision. Still, for months, the Ninja Cow eluded police and locals, making late night appearances on private lawns, leaving behind only cowpies as evidence of its existence. The effort to bring in, or even bring down, the Ninja Cow was not lacking. Police and local experts tried just about everything from luring the cow with biscuits and gravy to capturing her on an infrared camera. They played cow sounds on a laptop. But every attempt failed. Pretty much the only thing they didn't try was recreating the cow costume from Top Secret. And the more adept Ninja Cow became at eluding capture, the more her story captured the hearts and minds of Plattsmouth residents, spawning several Facebook fan pages and talk of an annual Ninja Cow Day celebration. 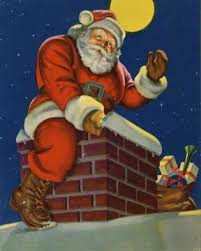 A worried letter from six-year old Leo Park sparked a mammoth operation to test what is believed to be the world's first chimney specifically designed to accommodate Santa Claus. The little boy's parents are having a house custom built and when Leo viewed the plans he was concerned that the chimney wasn't big enough for Father Christmas and his famous belly that shakes when he laughs like a bowl full of jelly.

As he was penning his traditional letter to Santa, Leo decided to also write a heartfelt missive about the chimney design problem to Jeremy Paxton, who owns the estate on which the new house is being built. In childish scrawl the letter reads: "Dear Mr Paxton, I am worried that my mummy's house does not have a big enough chimney. I think Santa Claus will get stuck. Please can you help. Love Leo Park."

Obviously size was the key consideration to ensure Santa won't get wedged tight on his way to stuffing the stockings and so Paxton enlisted a mathematician to take on the challenge and save the jolly old elf from turning red for the wrong reasons.

The Santa-friendly formula looked at risk factors of chimney entry, the size of St Nick's girth versus the width of the chimney at its narrowest point. To test what they said was the perfect chimney, Paxton enlisted the help of a stand-in Santa Claus in full padded outfit, a crane, a harness and winch to put the new chimney through its paces.

Leo was invited to watch as the great experiment got underway. "Go on Santa" he shouted out as the faux Father Christmas was lifted into the air towards the chimney. A few seconds later and Santa was successfully lowered into the chimney of the half-built house, re-emerging shortly after to deliver a hearty: "Ho Ho Ho."

"I can guarantee that this chimney is big enough for Santa and all the presents," he told Leo.An excited Leo gave a thumbs up to the St. Nicholas impersonator and rushed to hug him. "I'm absolutely delighted not just that Santa fitted into the chimney, but that that little boy, Leo, said to me: 'That was the best day of my life' which made the whole thing worthwhile," said Paxton. The Park family won't be able to inhabit their new holiday home until next December, just in time to get the milk and biscuits ready for their very special Yuletide visitor.