It’s another day in paradise and the coffees on. C’mon in and have a cup with me. Pick a seat and relax while I share several stories to start your day.

It’s a strange world out there with lots of unique people and products. Enjoy:

The FDA has approved a new "hangover cure" product that could be available on U.S. store shelves as early as next month.

The "Alka-Seltzer like tablet" is not an actual new ingredient, but rather a potent combination of caffeine, aspirin and an antacid. ABC News reports that the product, called "Blowfish," is already available at the Ricky's pharmaceutical chain in New York City and is scheduled to be introduced nationally in January. "It's the only over-the-counter drug that's specifically hangover related," Blowfish creator Brenna Haysom told ABC News. "The [Food and Drug Administration] has specifically said our formula is effective for treating hangover symptoms."

It's quite the sight to see inside the St. Paul impound lot. A trailer carrying a large fiberglass cow has been sitting in the lot for the past couple of weeks.

The trailer and cow had been parked on the 1400 block of E. Como Boulevard for such a long period of time that police considered it abandoned. Police took it to the impound lot on November 18. Authorities say the trailer had no registration. Someone went to the lot to claim the trailer, but the person couldn't prove ownership. The person who can prove ownership will have to pay more than $600 in towing and storage fees. 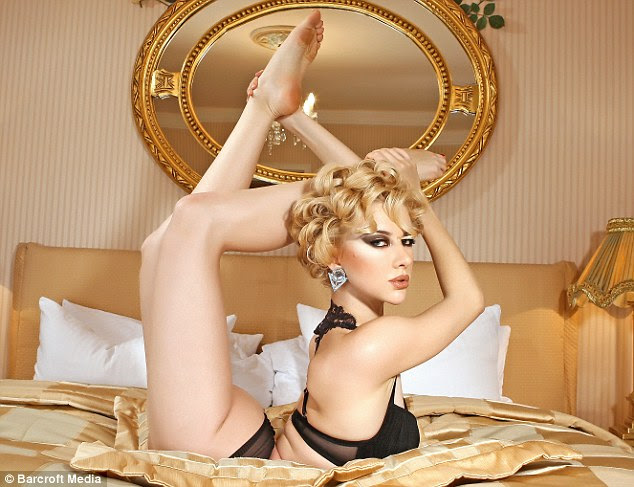 Want A More Flexible Schedule In 2012?

Then do I have the calendar for you.
25 year old Russian contortionist "Zlata" has just released a calendar featuring her in 12 of her most eye- (and spine-) popping poses. From cooking in the kitchen with one leg behind her head, to getting off a bus with, er, one leg behind her head, the spry former-gymnast has tied herself in knots to produce something to please her legions of fans.

More facts about Zlata, with many more examples of her art, can be found here, courtesy of the Daily Mail.

Posted by ImBlogCrazy at 8:18 AM