Looks like another beautiful day in the neighborhood. C’mon inside on this chilly Fall morning and have a cup of hot coffee with me. I’ve selected several stories to jump start your day. Grab a seat, relax, and enjoy:

You know things are wacky in Florida when news of criminality continues to be about the cops rather than the robbers. The latest Keystone Kops-like episode came when an off-duty cop was discovered passed out and drunk in his patrol car, the Miami-Dade, Fla., police department told local media.

And it gets worse: Instead of being cuffed and booked, Fernando Villa, 32, was allowed to go home after signing a form promising he would appear in court, the Miami Herald reported. The DUI incident is the latest in a string of embarrassments to hit Miami-area law enforcement.

Dozens of protesters from Occupy Wall Street converged overnight Thursday on another park in New York City – where they say a television set for an upcoming “Law & Order” episode replicating their Occupy Wall Street camp has been set up, according to various reports on Twitter, a live video stream and a demonstrator.

“Light, camera, ACTION! Everybody head to Foley Square. Bring y(ou)r headshots and make y(ou)rself at home! See you at midnite! #Mockupy #D9,” read a tweet sent out from the OccupyWallSt Twitter account. 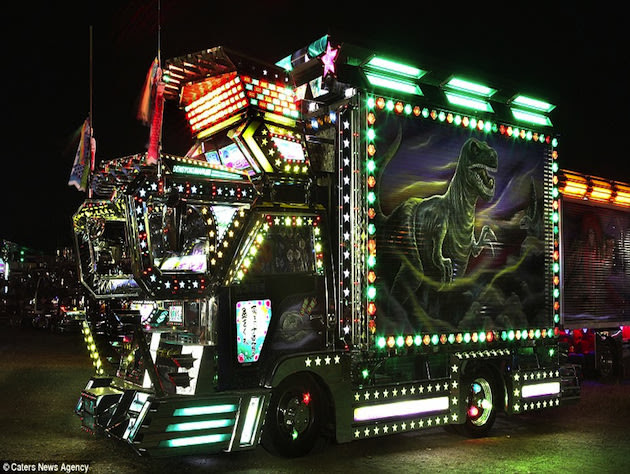 Japanese “light trucks” banned from highway for being too bright

These popular vehicles in Japan have given new meaning to the term, "blinded by the light." But Japanese authorities are putting the brakes on so-called "light trucks," citing the danger posed to other drivers.

There's huge competition amongst the "light truck" community in Japan's car culture. And if you've never heard of light trucks before, they're basically what they sound like: trucks decked out in intricate designs of brightly colored lights. Some light-truck enthusiasts spend hundreds of thousands of dollars decking out their vehicles. According to the Daily Mail, the trucks use up so much electricity that some are fitted with extra generators under the chassis and can only be powered up for about 20 minutes before overheating. You can check out a more extensive gallery of light truck photos by clicking here.