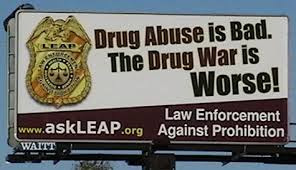 In conjunction with Peace Officers Memorial Day, some police are pointing out how too many law enforcers are killed in the line of duty enforcing a senseless and unwinnable "war on drugs."  The group, Law Enforcement Against Prohibition (LEAP), is calling for the legalization and regulation off all drugs, and they're telling stories about their fallen friends and colleagues to back up their case.

"When one of my best friends was killed doing an undercover drug purchase, it opened my eyes to the fact that not only are these drug laws ineffective, but they lead to brave and dedicated law enforcers losing their lives," said Neill Franklin, a 34-year veteran of the Maryland State Police and the Baltimore Police Department, now LEAP's executive director. "Ed Toatley was one of the best narcotics agents the state of Maryland ever had, but this failed drug war wasn't worth him losing his life over."

Here's a piece we have on Huffington Post today on this topic: http://www.huffingtonpost.com/neill-franklin/lets-legalize-drugs-to-sa_b_860473.html

WHAT: Candlelight vigil in remembrance of fallen colleagues

The candlelight vigil, which officially begins at 8:00 PM, is sponsored by the National Law Enforcers Memorial Fund and is part of National Police Week. 25,000 to 40,000 police officers and family members are expected to attend official events over the course of the week. The group of pro-legalization police officers will be available for on-site press interviews around 7:30 PM, before the start of the vigil.