As It Stands selection for Scum of the Month: meet Christopher Lee 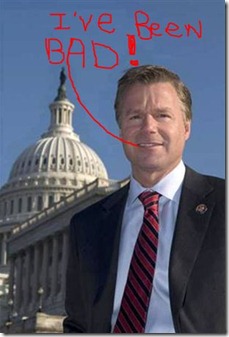 A married congressman from upstate New York resigned suddenly today after a scandal erupted over emails and a shirtless photo supposedly sent to a woman in response to a Craigslist dating ad.

Republican Christopher Lee had just begun his second term representing New York's 26th District. Just hours after the scandal broke on Gawker.com,announced he was quitting Congress, and a clerk read his letter of resignation on the House floor:

Posted by ImBlogCrazy at 4:04 PM

Please link to the equally angry condemnation of John Edwards....

Last year I chose John Edwards as Scum of the Month and in December he was a finalist for Scum of the Year.

I ran this on Lee because it just happened. You know, breaking news. Re-running something on Edwards would require a new scummy act. The world already knows about Edwards, so if anything new pops up I'll eagerly run it.

It's not my fault the latest scum bag is a Republican. I treat the Dems the same way when I discover their antics.

As far as dems getting away with screwing around you may want to check last year's headlines. They were right there with their Republican peers.

It's important to understand that 99% of politicians are scumbags with personal or party agends.