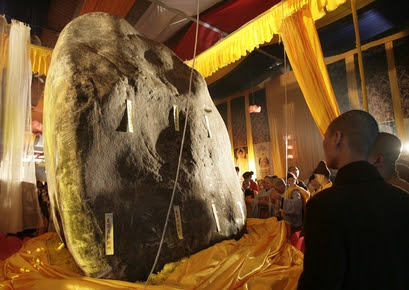 It’s been 40 years (1970) since I was in Vietnam. For decades afterward, all I heard was terrible stories of the high cancer rates among the general population caused by the Agent Orange we sprayed everywhere.

Now it seems, that Vietnam has emerged as a growing economy with it’s own billionaires, despite being communist.

Big businessmen are now looked upon favorably by the government. The 21st Century has been good to this once impoverished country. Rhetoric has been replaced with capitalism (for all intents and purposes).

One of the flamboyant entrepreneurs making it big in booming Vietnam unveiled a massive precious stone on Monday that he plans to transform into the world's largest jade Buddha.

AP Photo – Buddhist monks look a the jade piece as it was unveiled today in Hai Duong province.

Last night I watched a documentary about Afghanistan that showed footage of a number of Buddhist artifacts that were later destroyed by the Taliban. Maybe the Vietnamese are part of the cycle to balance out the destruction of the Buddhas of Bamiyan.

Not even
under mortar fire
do they flinch.
The Buddhas of Bamiyan
take refuge in the dust.
-Dennis Dutton