Why Obama should not have checked 'black' on his census form 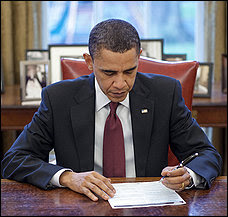 Here’s a good opinion piece by Elizabeth Chang,  on why President Obama should have acknowledged both his black and white backrounds when he filled out the census form this year.

She also correctly pointed out it was important to recognize all of one’s heritage. Not just one side. There’s no stigma to being biracial these days, and I agree with the author – Obama blew it.

“I have always considered Barack Obama to be biracial, and I had hoped that his election would help our country move beyond the tired concept of race. Unfortunately, the president is not getting with my program.

Although I knew Obama self-identifies as African American, I was disappointed when I read that that's what he checked on his census form. The federal government, finally heeding the desires of multiracial people to be able to accurately define themselves, had changed the rules in 2000, so he could have also checked white. Or he could have checked "some other race." Instead, Obama went with black alone.” Go here to read the rest.