Feel down? It may be better to talk to the dog 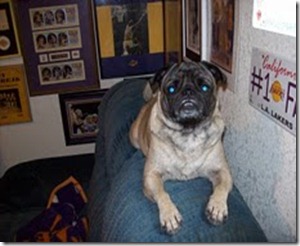 My pug Millie (shown here) is a great listener. She’s also a great therapy dog. I better watch out here – she isn’t a licensed therapy dog and I don’t want some therapy dog activists getting upset thinking I’ve don’t know the difference.

In one of my recent columns I talked about therapy dogs:

What do dogs, cats, and PTSD have in common?

When the column came out most people enjoyed it, but there were some therapy dog trainers with organizations that felt I was misleading the public when I said my pug Millie is my therapy dog (in the column). I was being light-hearted about it, but some people just didn’t get it I guess.

Anyway…let’s segue into today’s article on pets and people:

Many married couples say they share their troubles with their pet, poll finds