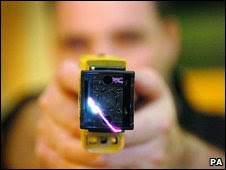 A man in Western Australia was engulfed in flames when police officers fired a Taser stun gun at him.

Police say they used the Taser on Ronald Mitchell, 36, when he ran at them carrying a container of petrol and a cigarette lighter.

They said that Mr Mitchell, who lives in a remote Aboriginal community, had been sniffing petrol. They suggested the cigarette lighter started the fire.

Mr Mitchell is in a critical condition in hospital with third degree burns.

Click here to read the rest at BBC News