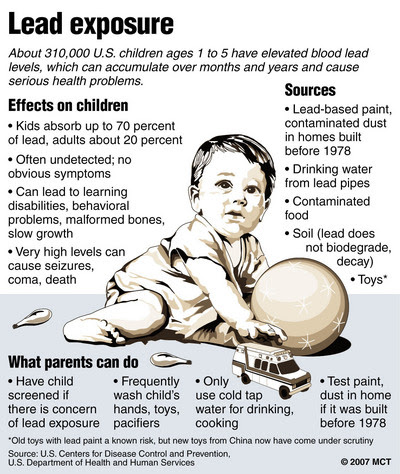 In it, I talk about the poorer neighborhoods being the most affected by lead paint, and some surprising results from that exposure when it came to criminality. I discussed how the children were the main victims of lead in the home, and some the symptoms involved.This news article looks like a step is being taken in the right direction to combat this deadly lead exposure.

(From the Associated Press today)

Nearly $100 million in federal stimulus money will go toward a program to remove lead- based paint and other health and safety hazards from low-income homes, Vice President Joe Biden announced Friday.
Biden announced the plan in the courtyard of an affordable-housing devel­opment operated by a community group that is getting $875,000 of that money to help identify and remove toxic paint and other health hazards from 225 Los Angeles homes.
Biden said the program will immediately employ workers to do the lead­abatement work. He said it will also save the country millions in future health care costs that otherwise would be spent treating peo­ple suffering from neurolog­ical damage, slowed growth and other ailments connect­ed to growing up in contact with lead-based paint.
“This is a real bang for the buck here,” he said. “You have people from this community filling good jobs, helping other fami­lies, helping children to stay healthy.”
South Los Angeles’ Esper­anza Community Housing Corp. was among 53 local programs in 20 states and Washington, D.C., getting grants through the U.S. De­partment of Housing and Urban Development to re­move lead-based paint and other hazards such as mold.

Posted by ImBlogCrazy at 2:58 PM