The Bilderbergers are back and they're still not talking... 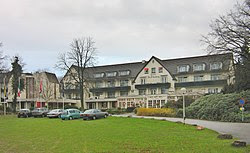 Are the people who 'really run the world' meeting this weekend?

The Bilderberg Group, the topic of many conspiracy theories, is now meeting behind closed doors in Greece.

From today until May 17, approximately 150 of the most influential members of the world's elite will be meeting behind closed doors at a hotel in Greece. They are called the Bilderberg Group or the "Bilderbergers," and you have probably never heard of them.
The group, co-founded by Prince Bernard of the Netherlands, has been meeting in secret every year since 1954. This year, says the British broadsheet The Times, they are meeting at the Nafsika Astir Palace in Vouliagmeni.
The individuals at the meeting come from such power houses as Google and the Wall Street Journal, the U.S. Senate and European royalty. Governments, the banking industry, big oil, media and even the world of academia are amongst the Bilderberg ranks.

Photo via Wikipedia commons. This is the Hotel de Bilderberg,

- scene of the first Bilderberg Conference in 1954.

Posted by ImBlogCrazy at 1:44 PM

Tim Geithner was seen there yesterday.