This month's full moon will pass almost directly through the center of Earth's shadow on Wednesday in what will be an unusually long total eclipse of the moon.

The lunar eclipse will occur just two weeks after a June 1 partial solar eclipse, when the moon blocked part of the sun as viewed from Arctic regions.

The eclipse won't be visible from North America due to its timing, which places the event in the daylight hours when the moon is behind the local horizon.

Too much coffee makes you hear voices, study suggests

Join me for a quick cup of Joe and go this morning. While we’re enjoying it there’s something you should know:

If you're hearing voices in your head, you may want to cut back on the caffeine. A recent Australian study showed a link between heavy coffee consumption, stress -- and auditory hallucinations.

Here's what happened: The volunteers listened to white noise played through a computer's headphones for three minutes. Every time they heard even a snippet of Bing Crosby's White Christmas, they were told to press a hand tally counter. (They weren't aware of the real point of the study -- they were told it was about auditory perception.)

The song was never played. But the participants who said they were very stressed, and very caffeinated -- those who regularly drank five or more cups per day, at 200 milligrams of caffeine each -- were more likely to imagine they'd heard it.

"We believe that high stress, in addition to taking high levels of caffeine, makes people yet more stressed and thus makes them more likely to 'overreact' to the environment -- i.e., to hear things that just aren’t there," explains Simon Crowe, the lead author of the study and a neuroscientist at Australia's La Trobe University, located in Bundoora, Victoria. The report was published in the April issue of the journal Personality and Individual Differences

It's worth noting here that there are some limitations to the study: The levels of stress and caffeine consumption were both self-reported by the 92 volunteers who participated in the experiment. And what if, somehow, the caffeine-stressball combo made participants more eager to try to please the researchers -- yes, of course we heard the song! It's lovely, isn't it?!

Then again, maybe that's just what the voices in my head are telling me.

How much caffeine do you consume each day?

Who Would You Say is the Fifth Face of Mount Rushmore?

If you observe Mount Rushmore from certain point, you can see that four former US presidents aren’t the only ones present.

Turning the photo for 90 degrees (as seen below) can help you visualize the fifth persona even better! Who would you say it represents? Think this was by accident or intentionally planned?

I almost see Tricky Dick Nixon (the sagging cheeks). If it wasn’t for the broken nose, he would be my guess.

Rushmore: did you know that the four presidents carved into the granite were initially planned to be depicted from head to waist?

You can see Gutzon Borglum’s (the man behind the sculptures) original plans by visiting wikipedia. 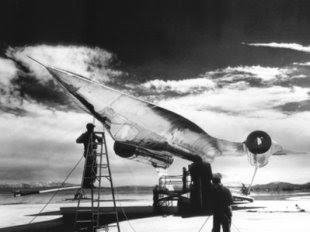 Few things capture the public's curiosity like Area 51. The top-secret military base (which doesn't officially exist) has been the subject of conspiracy theories for decades. What actually went on there? Something tells us we'll never know for sure. However, a recently revealed series of photographs provides some tantalizing new clues.

The photos, which were published by National Geographic, show a titanium A-12 spy plane. In one image, the satisfyingly sci-fi-looking plane hangs upside down while it is prepared for radar testing. In another shot, a group of officials with heavy equipment "remove all traces of the A-12 spy plane" after it went down in the Utah desert in 1963.

Of course, the photos don't prove that alien life exists--but they do go a long way toward proving the government wasn't exactly forthcoming with what was going on at Area 51. Cue the "X-Files" theme song.

It’s time for a cup of Joe and go. I find it interesting when someone turns up with unseen historical photos. A few years back it was some Marilyn Monroe photos.

This introductory period for the Beatles didn’t impress me. As a matter of fact I thought they were a bunch of“Bubble Gummers” and ignored them. As the years went by I grew to like their material as they matured.

‘They have been gathering dust in a basement for more than 40 years, but now U.S. photographer Mike Mitchell has decided to auction a group of pictures which capture the moment the Beatles became a worldwide phenomenon.” Story Here

You couldn’t get me to go to Mexico if you offered an all expense paid vacation and a case of Jack Daniels.

“Mexico's drug war has claimed more than 34,000 lives in the past four years. Despite the increasingly bleak headlines that often mention shootouts, beheading and mass graves, Americans have continued to visit the troubled country -- until now.

The Wall Street Journal wrote that several tour operators and hotel chains have seen a decline in the number of Americans visiting Mexico. Rest of story here.

I have been channeling "Trouble" for quite some time. Trouble wants the estate to give me the balance of the inheritance so that Trouble can live and communicate thru me. Trouble has the answers to many of the world's problems and will only be too happy to share --- for a price.

From MSNBC’s Pet’s and Animals this afternoon:

“Trouble, the beloved Maltese of billionaire Leona Helmsley who became an international celebrity when Helmsley died and left him $12 million, has died. The pampered pooch was 12 — 84 in dog years.

Interestingly enough, Trouble wasn’t the richest dog in the world when he died. That honor belongs to Gunther IV, a German dog left $372 million by his owner, reports Business Insider. Other mogul mutts include Miss Charlie Brown, an English cocker spaniel in South Dakota who stands to inherit $130 million from her mineral magnate owners.

Oprah Winfrey’s will is rumored to have earmarked $30 million for the care of her pups.” Rest of the story here.

It’s time for a cup of Joe and go. This morning let’s look at a little good old fashioned American know-how. Here’s some interesting inventions for 2011:

Joe Schwartz is a 90-year-old great-grandfather of three who enjoys a few puffs of pot each night before he crawls into bed in the Southern California retirement community he calls home.

The World War II veteran smokes the drug to alleviate debilitating nausea and is one of about 150 senior citizens on this sprawling, 18,000-person gated campus who belongs to a thriving — and controversial — medical marijuana collective operating here, in the middle of one of the largest retirement communities in the United States.

The fledgling collective mirrors a nationwide trend as more and more senior citizens turn to marijuana, legal or not, to ease the aches and pains of aging. But in Laguna Woods Village, tucked in the heart of one of the most conservative and wealthiest counties in California, these ganja-smoking grandparents have stirred up a heated debate with their collective, attracting a crackdown from within the self-governed community.

PHOTO - Lonnie Painter, 65, who uses marijuana for medicinal purposes and is the director of a group known as Laguna Woods for Medical Cannabis, medicates at his home in Laguna Woods, California.

Weiner Wednesday: what’s he going to do for his next act?

It’s hard for me to pass up WeinerGate. I laughed so hard while watching Jimmy Fallon’s take on Weiner Boy, I had coffee coming out of my nose! I promise, this will be my last post on him.If I were a politician nowadays I wouldn’t even own a cell phone! Look at the all the trouble it’s getting these politicos in. They don’t seem to realize the world’s watching while they make monkeys of themselves. 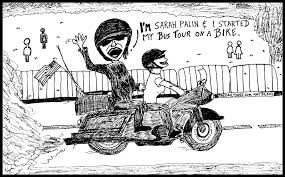 Who would of guessed the Sarah Palin traveling freak show had plans to travel abroad? The so-called “One Nation Tour” already hit a detour when former British prime minister, Margaret Thatcher, refused to meet with her. Can you blame Margaret? She’s just not interested in a retarded political wannabe’s extremist views, and un-educated take on the world.

I’d hazard to say Margaret got a kick out of Palin’s revisionist history where Paul Revere warned the British the Americans were coming! But, Margaret does have to keep up appearances and entertaining political clowns like Palin just wouldn’t do… my daw…ling! 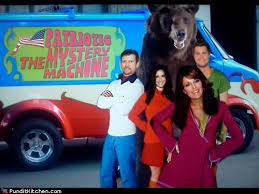 From The L.A. Times this afternoon:

“Margaret Thatcher, the former British prime minister, is well respected by Sarah Palin, but it doesn't appear that the feeling is mutual.

Recently the former Alaska governor revealed plans to take her "One Nation" road show across the pond next month, with a stop in London as she makes her way to Sudan.

"I am going to Sudan in July and hope to stop in England on the way. I am just hoping Mrs. Thatcher is well enough to see me as I so admire her," Palin told Britain's Sunday Times in an article titled "Reloaded and on a Mrs. T mission: the Palins are coming to Britain!"

But the woman affectionately dubbed the Iron Lady isn't interested in meeting with Sarah Barracuda during the hockey mom's trip.

"Lady Thatcher will not be seeing Sarah Palin. That would be belittling for Margaret. Sarah Palin is nuts," an unnamed "ally" told the Guardian.” - Andrew Malcolm