"The first responsibility of a leader is to define reality. The last is to say thank you."
-MAX DePree
at July 24, 2008 No comments:

Face the day's problems with Me - and seek my help and guidance - as to what you can do.
-from the TWO LISTENERS

"Success depends upon previous preparation, and without such preparation there is sure to be a failure.
at July 24, 2008 No comments:

"To accomplish great things, we must not only act, but also dream, not only plan, but also believe."
- ANATOLE FRANCE
at July 24, 2008 No comments:

A Good Place To Be

Good morning blog buddies!
It's another beautiful day and I'm ready to play the merry game of life. I hope you are too, because there's an awful lot to do!
My most recent As It Stands column - A President with PTSD? has been submitted for publishing. I'm not sure which column the editor is going to lead off this Sunday as my premier one with the Times-Standard. I suspect this one, however, will be controversial. I wonder out loud if McCain has PTSD.
I've already been on the phone with my veteran activist and dahlia-lover friend Carl Young. We generally work out all the problems in the world in our morning conversations so that we're both free to enjoy the rest of the day!
I'm looking into writing a column about the latest news on cell phones - They may cause Cancer!
The head of a prominent cancer institute issued an unprecedented warning to his faculty and Staff: Limit cell phone use because of the possible risk of cancer. This warning comes from Dr. Ronald B. Herbeman, director of the University of Pittsburgh Cancer Center.
Herbeman based his alarm on early unpublished data and suggested that brain tumors could be the result of long-term use of exposure to electromagnetic radiation.
I'll be researching this topic with an eye towards a column.

The ground is shaking in Asia as a 6.8 earthquake rocks the main Japanese island of Honshu!
Pray for the people!
at July 23, 2008 No comments:

A Day for Reflection 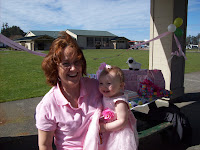 My wife Shirley and our
grandaughter Carrisa. 2008

It amazes me how fast things can change in your life.
It was just three years ago when I was buried in my bunker of misery - PTSD getting the better of me - and I saw few reasons to be happy.
Now I'm in the happiest time of my life and I feel like I'm part of the human race again.
My ability to write has re-surfaced from the quagmire of my isolation and insecurity. The words now fly, like a flock of Herons, across the skyline of my word processor. Everything is a little brighter. My mission now is to free the words from the captivity of my imagination and to let them run rampant across my columns like a herd of buffalo.
I feel real good about the move to The Times-Standard as they are a 150 year-old newspaper that is widely read here in Humboldt County.
I hope I can meet their expectations.
I want them to know I appreciate their adding me to their staff of writers, and that I'll give them my best efforts.

LITERARY QUOTE FOR THE DAY

"What is character but the determination of incident? What is the illustration of character?"
Par Lagerkvist (Swedish Writer)

"Behind every successful man is a surprised woman."
Maryon Pearson

My As It Stands column has been moved to to Times-Standard and will appear in their Sunday Opinion Page this weekend on July 27, 2008!

The editor will be doing a promo on me this week introducing me to their readers.
I'm pleased with the contract we signed, the money offered, and the potential it has for growth.
Times-Standard is owned by MediaNews Inc. a big newspaper chain.

It's one more small step to national syndication. My challenge is to continue turning out columns that educate, entertain, and stimulate people to reply to them with their comments via emails or letters-to-the editor.

ANOTHER DAY IN PARADISE

QUOTE FOR THE DAY
"I write whenever it suits me. During a creative period I write every day; a novel should not be interrupted."

A single, blond, pregnant girl goes to the grocery store. A couple that she knows notices she's pregnant. The lady asks, "Who's baby is that?"
The blond says, "Well I don't know for sure. They are going to take bloods tests, but I think it's mine."

A Satanic Surge results from Column

Back again.
I have been deluged with emails from so-called Satantists and the Online version of the Eureka Reporter where it appeared - has gathered over 3000 hits in 24 hours! Looks like I touched another nerve central in America.
That, of course, is my goal. To make people think about things. To entertain them and to educate them them. To challenge them and to make them laugh.
Sometimes - like this case of the Satanic surge - I get lots of hate mail. That's fine. One has to expect that. It's only part of the game.
I have a mission to write. That's what I do. That's who I am. A writer.
I love words and their ability to make us dream and think critically on paper for all to see. They are my personal vanguard to the world as I sit behind my word processor and pour out my soul daily.

CHANGE COMING SOON
Sometime this week I expect to be announcing a change in publications for my column
AS IT STANDS.
Stay tuned. It's a step up.

STILL WORKING ON ADS
Google wanted a domain name that I own so I got one - davesblogcentral.com
It'll be another day or two before this link is available but when it is I should be able to get ads and start that process. This is my experiment in Desk Top Publishing and I don't expect to get rich from it.

QUOTE FOR THE DAY

"But truly, I have wept too much.
The Dawns are heartbreaking.
Every moon is atrocious and every sun is bitter."

If love is blind, why is lingerie so popular?"

BATMAN BREAKS BOX OFFICE RECORDS with $155.3 Million weekend
I can remember reading comics with my brother-in-law/and one of my best friends in the world-Tom Holloway-back in the sixties.
We use to spend hours talking about who Batman could beat up among the other DC characters. We always agreed SuperMan was the top dog. Then Marvel Comics came along and we starting falling for SpiderMan, The Fantastic Four, Doctor Strange, Thor-God of Thunder,The Hulk, X-Men, and the whole Marvel line of good guys and bad guys. Those were heady days.
Now, to see these comics come alive on the Big Screen - and be a box office hit - is still a wonderful feeling! Sort of a blast from the past!

AS IT STANDS NEWS

Coming soon....Presidential Libraries and Corruption, and
Prosthetics, Thieves, and Payback

The Satanic Community is Upset With Me!

I got an early morning email today from a witch who was very upset about my article in The Eureka Reporter today. (See link - The Eureka Reporter under Opinion)
My column has already pulled over 1200 readers Online after just being published 8 hours ago.
It is the most read thing in the entire issue today. Not bad.

I'm waiting to get my Google ads here soon. They said it takes a day or two. This site is still under some construction, but is coming along. Note slide show (on bottom) and Links.
I want to encourage everyone who has my site here to visit it each day - as I will have something to say.... and share!
Plus I'll make more money on the amount of hits I get when the ads are in place when you visit me! No use being shy eh?

OBSERVATION OF THE DAY: "He who binds to himself a joy does the winged life destroy;
But, he who kisses the joy as it flies lives in eternity's sun rise."
William Blake
(English Poet)

Right now I'm living my dreams by pursuing my passion for writing, which in the last two years, has risen from my personal ashes of PTSD and come back to me like an old friend.
I've always written things on my own ever since I first learned how to put a sentence together with another. My delight with words grows again from that garden of my imagination, and lightness shines forth were not so long ago darkness dwelled.

OBAMA IN EUROPE RIGHT NOW
.Barack Obama's appearance at the "Victory Garden" in Berlin's Tiergarten park is expected to draw hugh crows and is being likened to Jogn F. Kennedy's celebrated "Ich bin ein Berliner" performance of 1963.
Germany's leaders however, are hesitant to show Obama any love yet because their not so sure he's going to be the next president of the United States. It's interesting to see this world reaction to Obama. I think many see him as a way for good change in this country. I have to agree that he represents change and that McCain is more of the same - which has been devastating on our economy and how the world has been viewing us.

QUESTION
How many laptops, on average, do US travelers lose each week?
(Try 10,278 - the next question is who ends up with these laptops?)

It's time to go now. There are things to see and do and the day doesn't hold enough hours to do them all!
Peace be with you all!
at July 20, 2008 No comments: